King Tutankhamun is one of the best known rulers of Ancient Egypt. Take my quiz and see how much you know of him.

Quiz Answer Key and Fun Facts
1. Tutankhamun is the only Pharaoh to have a nickname in popular culture 'King Tut', but can you tell me what his name means?

His birth name was Tutankhaten, which meant 'Living image of Aten'. He changed his name after he became Pharaoh, although it may not have been by choice as it was an attempt to remove Akenhaten's Amarna Revolution.
Ankhesenamun's name means 'Living through Amun' whereas her birth name Ankhesenpaaten meant 'Living through Aten'.
2. Who is generally accepted as Tutankhamun's father?

Akhenaten died after a 17 year reign. It is still debated who reigned between his death and Tut's ascending the throne. Some believe Nefertiti may have ruled for a time under the name of Ankhkheprure Neferneferuaten. Another name sometimes suggested is Smenkhkare, who is just as mysterious.

There are theories that Smenkhkare is Tutankhamun's brother or father, or another name for Nefertiti.
4. King Tut was only nine years old when he was married. Can you tell me the name of his bride?

Ankhesenamun was possibly his half sister and was born as Ankhensenpaaten. She changed her name along with Tutankhamun's to reflect their belief in the God Amun.
Kiya is believed to be Tut's mother.
Nefertiti is believed to be his step mother.
5. King Tut's reign did not make a huge impact on Egyptian history compared to some other Pharaohs. Approximately how long did he reign?

He only reigned for about ten years. He died around the age of eighteen or nineteen. There is some controversy over his death. Some believe that he was murdered, others believe that he may have been in an accident and died from infection.
6. Who succeeded him as Pharaoh after his death?

Ay took the throne after him, marrying Ankhesenamun to legitimise his rule. He only ruled for four years, after which Horemheb began his rule. Horemheb tried to eliminate any evidence of the reigns of Akhenaton, Tut and Ay. But in doing so he made Tutankhamun more intriguing.
7. Howard Carter was obsessed with finding Tutankhamun's tomb. What year did he discover the tomb?

Lord Carnarvon had become annoyed that Carter had yet to find any evidence of the tomb, and so only allowed funding for one more season. The tomb was eventually discovered in November 1922. The tomb was small and cramped compared to other tombs found in the area.
8. Tut's tomb was not as extravagant as other Pharaohs. His sarcophagus, however, was extraordinary. How many sarcophagi was his body in?

His body was within 3 sarcophagi. The first is the largest and is still in the original tomb in the Valley of the Kings. The second is made of wood and covered with gold and semi precious stones. The third is solid gold and weighs approximately 110 kilograms.
9. What other remains were found in his tomb with him?

One of the female foetuses was approximately 5 months in gestational age and the other between 7 and 9 months gestation. It is believed they were stillborn.
10. Who was the first person to die from King Tut's 'curse'?

Lord Carnarvon died five months after the opening of Tut's tomb. He may have died from a mosquito bite that became infected. The story goes that when Lord Carnarvon died in Cairo, all the lights went out and back in England at the same time his dog howled loudly and also died.

Lady Evelyn Herbert was Lord Carnarvon's daughter. She entered the tomb when it was first opened and she lived until the age of 78.

Derry Douglas, was present during the excavation of the tomb and analyzed Tut's mummy, he died in 1969.

Of course Carter never believed in the curse and lived until the age of 64.
Source: Author MooBoo 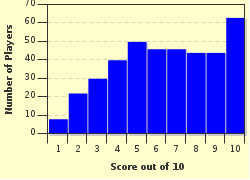 Related Quizzes
1. Which Pharaoh am I? Average
2. Royalty in Ancient Egypt Average
3. Akhenaten, the Heretic Pharaoh Average
4. The Incomparable Nefertiti Average
5. Ramses II Average
6. Who's Who in Ancient Egypt Average
7. Queen Hatshepsut Average
8. Which Ptolemy am I? Tough
9. Queen Tiye Tough
10. The Beautiful One Has Come Average
11. Tales of the Mummy Average
12. The New Isis: Cleopatra Average


Other Destinations
Explore Other Quizzes by MooBoo