Quiz Answer Key and Fun Facts
1. Who was Ramses' father?

Seti appointed his son as his Prince Regent when Ramses was only 14 years old. Ramses ascended the throne on May 21 1279BC, when he would have been in his early 20s.
2. With which Biblical event is it generally believed Ramses was associated?

Egyptologists class Ramses II as the third King of the 19th Dynasty.
4. During his long reign, Ramses named a number of consorts as "Great Royal Wife", sometimes simultaneously. How many "Great Royal Wives" did he actually have?

While it was common for Pharaohs to have several wives, and many concubines, due to Ramses' long rule, eight different ladies held the title.
5. Which of all his "Great Royal Wives" was Ramses' favourite?

The famous Nefertari was clearly his favourite. Her tomb in the Valley of The Queens at Luxor is justifiably noted as one of the most beautiful. Meritamen and Nebettawy were the daughters of Nefetari and Isetnofret respectively, and became Ramses' wives after the deaths of their mothers.
6. Ramses was a prodigious builder. Even in modern times, many of his statues, monuments and temples astound visitors. Which of the following did Ramses build?

The Great Temples at Abu Simbel are arguably his greatest building achievement. Four colossal seated statues of Ramses himself, each 20 metres high, dominate the facade. A smaller temple is dedicated to Nefertari, but not without huge reference to Ramses himself.
7. Which battle, highly praised in Ramses' monuments, was actually far less of a victory than he claimed?


Answer: The second battle of Kadesh

The second battle of Kadesh, fought in what is now Jordan, was probably the largest chariot battle ever, with over 5,000 chariots involved as well as almost 10,000 foot soldiers. The outcome can best be described as 'an honourable draw', despite Ramses' determined efforts to paint it as a crushing victory.

It is however, notable as ending with the first ever recorded Peace Treaty in history.
8. When Ramses died, after over 66 years on the throne, who succeeded him as Pharaoh?

Is is believed that Ramses fathered over 110 children, roughly evenly divided between sons and daughters. This theory seems to be borne out by the enormously huge tomb, KV-5, in the Valley of The Kings, built for his children.
9. Following his death, Ramses, as was fitting, was buried in a tomb in the Valley of Kings in Thebes (Luxor). However, the tomb was found to be empty. Why?


Answer: Priests had moved his mummy to protect it from grave robbers.

Because of the great wealth buried with them, the Pharaohs' tombs were targeted by grave robbers. All too frequently, the mummies were desecrated, and so, the High Priests secretly moved many of them (54 in total) to a highly inaccessible secret cache, where they stayed hidden until 1881.
10. Ramses II was issued with a modern-day Egyptian passport.

In 1974, the curators at the Egyptian Museum were alarmed to notice sudden deterioration in Ramses' mummy. Arrangements were made to fly the mummy to Paris, and a full Egyptian Passport was issued (showing occupation as "King (deceased)"). On arrival in France, the mummy was given full honours as befitting a Head of State.

Conservation work to cure a fungal growth was carried out as well as other preservation works, and Ramses II was placed in the Royal Mummy Room at Cairo Museum.
Source: Author sancho_pft 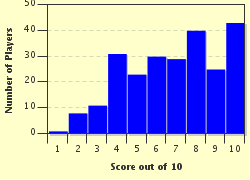 Related Quizzes
1. Which Pharaoh am I? Average
2. Royalty in Ancient Egypt Average
3. Akhenaten, the Heretic Pharaoh Average
4. King Tutankhamun Average
5. The Incomparable Nefertiti Average
6. Who's Who in Ancient Egypt Average
7. Queen Hatshepsut Average
8. Which Ptolemy am I? Tough
9. Queen Tiye Tough
10. The Beautiful One Has Come Average
11. Tales of the Mummy Average
12. The New Isis: Cleopatra Average


Other Destinations
Explore Other Quizzes by sancho_pft