Kings and Queens I Trivia Quiz

This quiz deals with strange facts concerning the life and reign of British monarchs and is the first part of a total of 3 quizes. Enjoy!

Quiz Answer Key and Fun Facts
1. William the Conqueror became king of England after defeating Harold's army at the Battle of Hastings in 1066. He is famous for having had the Domesday Book complied, which listed all the country's wealth so that William could tax it. However, William never actually read the Domesday Book. That is because he suddenly died before it was finished?

William never got to read the book because he could not read, which was quite natural back in the 11th century. Moreover, since he could not write, he signed papers and documents with a cross!
2. The next ruler of England was William II who took the throne in 1087. What was his nickname?

William II had red hair and a red face, therefore, he was nicknamed Rufus which means "red" in Latin! He died on 2 August 1100 after being shot by an arrow during one of his hunting trips. Some say it was an accident, others believe it was murder on the orders of his brother Henry. Either way, Henry became king ... Henry I.
3. Henry I ruled England from 1100 till 1135, when he died. But how did Henry I die?


Answer: He died of a fever

Although Henry I was not keen on stuffing himself with too much food, he died of a fever caused from eating too many eels, even though he had been advised otherwise by his doctors.
4. Henry I had left the English throne to his daughter Matilda?

Henry also left his lands in France to his nephew Stephen. But Stephen wasn't very satisfied and invaded England in order to grab the English throne from Matilda.
5. The next King of England after Matilda was Henry II (1154-1189). He is mostly famous for having an Archbishop murdered. What was the name of the Archbishop?

Thomas Becket and Henry II were friends. Moreover, it was Henry himself who made Becket Archbishop of Canterbury. One day, they had a fight and Henry wished he was dead, but he didn't really mean it (that is what some historians say). Unfortunately, some knights misunderstood him and decided that it would be a good thing if they killed the Archbishop so as to please their king. And that was what they did.
6. Next in line was Richard I, son of Henry II. He is most known for having fought in the Crusades. When he was returning from the Crusades, he was captured by the Austrians and the English had to pay a ransom to get him back. When the Austrians were searching for him, he had disguised himself as a servant. But the Austrians saw through his disguise and captured him. According to a story, what gave King Richard away?

Absent-minded Richard had not taken off the gold ring he was wearing and that gave him away and he was arrested. But maybe this part of the story is not true. What is true though is that he was captured and held for ransom.
7. When Richard died, John I became King. Most people know him for having signed the Magna Carta. But what does 'Magna Carta' mean?

The Magna Carta was actually a document with which John agreed to give power to the barons. Like William the Conqueror, he too could not read or write so he didn't really SIGN the Magna Carta. What he did instead was STAMP it with the Royal Seal.
8. The next King was Henry III who ruled the country for 56 whole years. One of the funny facts during his reign was that he had been given a very strange present from Emperor Frederick II. What was that present?

Henry III kept the leopards in the Tower of London and people could come and watch the animals. But that was not the only strange present that he had been given. The King of Norway gave Henry a polar bear in 1251! The bear was actually seen many times fishing in the River Thames!
9. In 1272, Edward was crowned King and became Edward I. He became known as the "Axe of the Scots" for having beaten the Scots numerous times.

He was known as "The Hammer of the Scots". He also managed to steal the Stone of Scone from the Scottish people - the Stone of Scone was their coronation stone. Besides defeating the Scots, he also defeated the Welsh. His son, Edward II, went on to become the first Prince of Wales...
10. Edward II was nothing like his father. He is most famous for having been beaten by the Scots and lost a very famous battle. How is this battle known today?

Edward II met a nasty end. His wife Isabella raised an army, arrested the King and had him murdered in prison so that her son would become king. Poor Ed!
Source: Author Warzycha 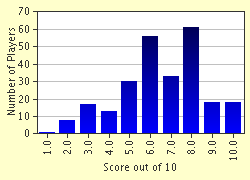