The King is Dead: Long Live the King Quiz

How much do you know of the indignities suffered at the time of death, and thereafter, by English kings through the centuries? All multiple choice, so take a guess.

Quiz Answer Key and Fun Facts
1. Already close to death, the king was given lethal injections of morphine and cocaine shortly before midnight on 20th January 1936. Which monarch was helped on his way to ensure that news of his demise would be broken in "The Times" rather than the less prestigious evening newspapers?

It wasn't until the private diaries of King George's personal physician, Lord Dawson, were made public in 1986 that details of the king's final hours were disclosed. Surmising that George might linger for many hours the doctor wrote "I therefore decided to determine the end and injected (myself) morphia gr.3/4 and shortly afterwards cocaine gr. 1 into the distended jugular vein."
2. The last English king to be buried in Westminster Abbey, this unfortunate monarch suffered a heart attack at the age of 76 whilst sitting on the toilet in Kensington Palace. Which sovereign met with such an undignified end?

A long-time sufferer of constipation, George's exertions on that October morning in 1760 were sufficient to bring on a fatal heart-attack.
George had asked that one wall of his coffin should be removed and the sides of his wife's coffin opened, so that their ashes would be able to mix. This was done and his remains, together with those of his wife, Caroline of Ansbach (who died 23 years before him), are to be found in an enormous sarcophagus in the vault of Henry VII's chapel in Westminster Abbey.
3. Said to have been England's tallest monarch at 6 feet 3 inches (190.5cm), this king needed an extra large coffin for his burial in the newly constructed St.George's Chapel in Windsor. Following his premature death the crown passed to his twelve-year old son. Who was this royal "giant"?

Although Edward I was nicknamed "Longshanks", and at 6 feet(183cm) towered above his contemporaries, it was discovered in 1789, when Edward IV's coffin was opened, that he was even taller.
After his sudden death at the age of 40 in 1483, Edward's disembowelled, embalmed and semi-naked body was displayed for ten days in the Chapel at the Palace of Westminster where he had died.
4. Killed in battle, the naked body of England's last Plantagenet (Yorkist) king was returned to Leicester on horseback and put on public display for three days before being buried in an unmarked grave. His successor was crowned on the battlefield with the circlet retrieved from underneath a hawthorn bush having fallen from the slain king's head. Who was this much maligned monarch?

Richard died defending his crown against his distant cousin, Henry Tudor, at the Battle of Bosworth Field. During the Reformation his grave was desecrated and it was thought that his bones were thrown into the River Soar, although recent research has indicated that they may rest under a Leicester car park!

Following a 2012 excavation of the car park it was finally proved that the recovered bones were indeed those of Richard III. His remains were subsequently reburied in Leicester Cathedral.
5. In the sixteenth century this king's sarcophagus in Normandy was vandalised and, two centuries later, at the time of the French Revolution, his coffin was again desecrated and his bones thrown into the River Orne. It seems a thigh bone survived, and in 1987 this was ceremoniously reburied in its original resting place in St. Stephen's Abbey in Caen. Which king, or a small part of him, is laid to rest here?


Answer: William I (The Conqueror)

After William died in Rouen, it is said that servants ransacked his rooms, stripping them (and the king!) bare. His burial didn't exactly go smoothly either; he had grown so large that his body burst when his attendants tried to squash it into his sarcophagus; a fire broke out during the funeral and proceedings were halted while everyone tried to douse the flames; finally an irate landowner interrupted the ceremony again demanding overdue payment for the land on which the king was to be buried, only being appeased when his son, King Henry I, offered him 60 shillings as an interim payment.
6. In small wooden chests on display in an English cathedral lie the remains of some of the oldest of the country's monarchs. Among them very the first King of England, King Egbert; King Canute and King Alfred's son, Edmund. Which cathedral houses these ancient bones?

There are six wooden chests in all, although precise identification of their contents is impossible, the boxes having been opened by Parliamentarian soldiers in 1642 and their contents scattered, only to be roughly replaced 19 years later. The remains are known to include those of the founder of Winchester's Saxon cathedral, King Cynegils of Wessex, who died in 643 at the age of 69.
7. Greatly revered two centuries later by King Henry III, this monarch dedicated much of his life to the construction of Westminster Abbey, and fittingly was the first to be buried there, just a few days after its completion in 1066. Who was this saintly king?

Edward was canonised in 1161 (the only British king to become a saint), and in 1269 King Henry III, together with his male relatives, ceremoniously transferred the holy bones to a magnificent shrine he had constructed within the newly enlarged Westminster Abbey.
8. After enjoying a full life, and a string of mistresses, at the age of 54 the king was dying from the effects of a stroke. He converted to Catholicism on his deathbed, and died surrounded by clergy, peers, ambassadors, doctors and relatives, not to mention ladies-in-waiting. He was buried in Westminster Abbey at midnight on 14th February. Who was this merry monarch, who died so publicly?

Due to the apparent suddeness of his death, it was rumoured that Charles had been the victim of poison; a view which was upheld by one of his many mistresses, the Duchess of Portsmouth. However, there was no proof of this.
9. The only monarch to be buried in Canterbury Cathedral, this epileptic king was told by a fortune-teller that he would die in Jerusalem. He never travelled to the Holy Land, but on being taken ill whilst visiting Westminster Abbey in 1413, he was helped into a side chamber, where after being told that the that room was known as the 'Jerusalem Chamber' he died. Which king was he?

Rumours abounded at the time of Henry's death that while his body was being transported by boat to its final resting place in Canterbury it was thrown into the sea by superstitious sailors. Claims that they substituted another body in its place were put to the test when the wooden coffin was opened in 1832.

Inside was a lead coffin, which when unsealed showed the perfectly preserved features of the long deceased king, complete with thick red beard. Unfortunately, once exposed to the air the body soon disintegrated.
10. This king owed his death to his love of lampreys. Despite his doctor's warnings he indulged his taste for this eel-like delicacy, and paid the ultimate price. He knew the risks, and a week after eating the fateful meal, the king was dead. Although he died near Rouen, France he had made arrangements to be buried at Reading Abbey in England where he had laid the foundation stone fifteen years earlier. Who was this "Lion of Justice"?

Lampreys have poisonous strands in their backs which must be removed before cooking. It seems that the king's chef wasn't quite as conscientious as he could have been in this regard! Henry died of food poisoning in 1135 at the age of 67.
Source: Author fringe 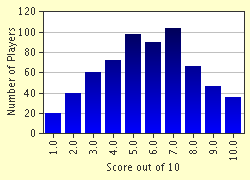