This is my second quiz out of three that deals with British monarchs. You are welcome to give it a try!

Quiz Answer Key and Fun Facts
1. What was the name of the wife of Edward III?

Actually, Edward III had quite a few problems concerning his wife's behaviour. Philippa once borrowed money from Germany and promised the crown jewels as a guarantee. Poor Edward had to pay 30000 packs of wool to get them back!
2. Richard II ruled the country for 22 years (1377-1399). He is famous for crushing a rebellion led by Wat Tyler. The peasants were protesting against a much hated tax, the Poll Tax. But how old was King Richard at the time?

Richard was just 14 years old! However, when he was crowned king he was only 10 years old and it is said that he collapsed during the ceremony and had to be carried out.
3. Richard II had no children of his own. His cousin, Henry IV, snatched the throne from him and Richard died in prison in 1399. Henry IV was not a very popular ruler. He even had an Archbishop executed. But which one?

After the archbishop's execution Henry IV suffered from bad health: his hair was full of lice, his eyes were dry and sore and had red spots all over his skin. It was believed that he had been cursed for having executed the poor archbishop.
4. The next king of England was Henry V. He went to war against the French and defeated them at the Battle of Agincourt.

Henry V was a very good soldier and devastated the French during his reign. Sadly he died while fighting the French at the age of 35 because of dysentry. What a way to die!
5. Henry VI was not very strong king. He had a mental breakdown from August 1453 till Christmas 1454 during which he couldn't recognize anyone and had mobility problems. He was murdered in 1471. But where was he murdered?


Answer: At the Tower of London

Every year, roses and lilies are placed at the spot he was murdered in his memory.
6. Edward IV was the first king since Henry II to die without owing money. Why is that?


Answer: The French paid him to stop fighting them

Edward IV invaded France but was given money to go back home, which he accepted. At the time, there was a lot of fighting going on in England - the Wars of the Roses - so it wouldn't have been wise to go to war with the French.
7. Edward V was son of Edward IV. When Edward IV died, his brother Richard III was supposed to look after 13 year old Edward V, until he was able to rule on his own. But after 11 weeks, the Bishop of Bath said that Edward IV had not been properly married to his wife, so Edward V shouldn't be king.

As a result, Richard III finally took the throne. It has been said that Edward V was murdered in the Tower by his uncle Richard. But nobody can be certain about that. Others believe that Edward was murdered by Henry VII. Who knows?
8. Richard III lost the crown to Henry VII in a battle which ended the Wars of the Roses. How is this battle known to us today?

Did you know that Richard III was the last king to die on the battlefield? Actually, the fact that he had been wearing his crown during battle must have helped his enemies to spot him and take him out, don't you agree?
9. After defeating Richard III, Henry VII became king. But there were many people who still supported Richard. What did crafty Henry do to put his enemies on his side?

England was united at last after a long period of war and misery during Henry VII's reign. However, Henry VII was not considered as a very popular king.
10. The next ruler of England was Henry VIII, one of the most well-known monarchs of Britain. He is famous for many different things: having made himself head of the church, having been married to six wives, having his friend Thomas More executed, etc. But what was one of the key factors that led to Henry VIII splitting from the Catholic Church?


Answer: the Pope did not allow him to divorce his first wife

The Pope didn't not want Henry VIII to divorce his wife Catherine of Aragon. So Henry left the Catholic Church and established a new one. The funny fact is that in a book which Henry VIII wrote, he insisted that "marriage should be forever"! Well, he was forever married... but with six different wives!
Source: Author Warzycha 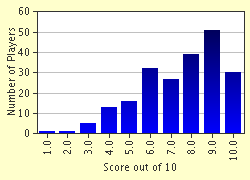