*Queen Victoria just loved to epitomize 'middle-class values', but here is a multiple choice quiz about the extra marital exploits of the British monarchy over the years. I give you the name of the mistress, you give me the name of the roving royal.

Share on Facebook
Share on Twitter
Share by E-Mail
Author
Supersal1
Time
3 mins
Type
Multiple Choice
Quiz #
137,907
Updated
Dec 03 21
# Qns
10
Difficulty
Average
Avg Score
6 / 10
Plays
1271
This quiz has 2 formats: you can play it as a or as shown below.
Scroll down to the bottom for the answer key.

Mother of James Duke of Monmouth, he of the ill-fated rebellion.
2. Jane Shore?

History buffs will know that Edward V is unlikely to be the answer to any of these questions as he was one of the ill-fated 'Princes in the Tower' and didn't get the chance to marry, much less play away.
3. Barbara Villiers?

It wouldn't be too difficult to produce 10 questions about Charles II and his various mistresses!
4. Lily Langtry?

I doubt that his mother, Queen Victoria, was amused!
5. Rosamund Clifford?

Legend has it that she was poisoned by Henry's Queen, the formidable Eleanor of Aquitaine.
6. Dorothy Jordan?

Dorothy was an actress and bore William ten children. However, when William moved one step closer to the throne with the death of his niece, he quietly dropped poor Dorothy - what a cad!
7. Charlotte Sophie Kielmansegge?

Charlotte was short and fat. King George I had another main mistress, Ehrengard Melusina von Schulenberg, who was tall and thin. The English public promptly dubbed them 'The Elephant and the Maypole'.
8. Alice Perrers?

Edward rather ruined his chivalrous image by taking up with the avaracious Alice in his dotage.
9. Elizabeth Blount?

Strangely, Henry felt no need to marry Elizabeth and so she kept her head on her shoulders.
10. Elizabeth Villiers?

Also known as 'Squint-eyed Betty', though presumably not by William!
Source: Author Supersal1

This quiz was reviewed by FunTrivia editor bloomsby before going online.
Any errors found in FunTrivia content are routinely corrected through our feedback system.
Most Recent Scores
Jan 11 2023 : Guest 77: 9/10
Dec 31 2022 : Guest 174: 10/10 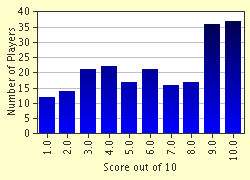