Do you know your English monarchs? We shall see. Enjoy!

Quiz Answer Key and Fun Facts
1. Which Saxon king was nicknamed 'the Unready'?

Aethelred was the longest reigning Anglo-Saxon king (978-1013 and again, 1014-1016, a total of about 37 years). The nickname 'Unready' means 'without advice' or 'ill advised' and thus refers to those around him rather than the king himself. However, the first written record of the nickname dates from about 1180, so it may not be very informative.
2. Who is the only English king called 'the Great'?

Alfred was Egbert's grandson and was one of England's best kings.
3. How many king Edward were there before Edward I?

Yes there were three. They were Edward the Elder, Edward the Martyr and Edward the Confessor.
4. Where was King Stephen from?

Stephen's father was count of Blois as were his two elder brothers and thus he was called Stephen of Blois. His whole reign was throughout the civil war called the Anarchy between him and his cousin Matilda.

Blois is on the River Loire, between Orleans and Tours.
5. Whose nickname was Curtmantle?

Curtmantle means 'short coat'.
6. Which of these was one of king John's nicknames?


Answer: William I the Conqueror

Henry succeeded his brother William II Rufus in 1100 after the latter was killed by an arrow in the New Forest. Henry's only legitimate son, William Adelin, died in 1120, so after Henry's death Stephen of Blois succeeded and the Anarchy followed between Stephen and Henry's daughter Matilda.
8. Whom did Archbishop Langton call 'the greatest knight that ever lived'? He became the regent after king John's death.

Richard reigned for 10 years but only spent 6 months in the country during that reign. He fought against Saladin in the Holy Land in the third crusade. Also, on his return from the crusade he was captured and England had to ransom him.
10. What was William I the Conqueror before he was king of England?

William had been the Duke of Normandy since he was a small child. While he was young there were a number of unsuccessful assassination attempts by his cousins, and learnt life the hard way.
Source: Author Jayjaw 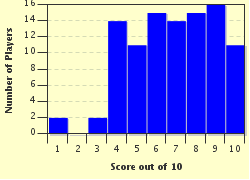 
Other Destinations
Explore Other Quizzes by Jayjaw