Here, in chronological order, are questions on the nicknames of ten English monarchs.

Quiz Answer Key and Fun Facts
1. Who is the first English king to carry the title "the Great"?

Some sources say Alfred is the only one to carry this title, while others call Canute "the Great" also. Either way, Alfred, who ruled from 871 to 900 AD, was assuredly the first. Alfred became known as the "Father of the English Navy" as a result of the fleet of ships he constructed to help in defending England from invasion.
2. "The Unready" is a nickname given to which monarch?

The reign of Ethelred the Unready from 978 to 1016 AD was ineffective, noteworthy mainly for payment of the "Danegeld", an attempt to buy off the Danish Viking invaders with money.
3. Edmund II, who reigned in 1016, was known as:

He earned the nickname after performing brilliantly in a series of battles against the Danish invaders.
4. William I became king after winning the Battle of Hastings in 1066, and became known as William the _____________.

The famous Battle of Hastings took place on October 14, 1066, but William wasn't crowned until Christmas Day. Fittingly enough, William's death in 1087 was caused by a wound received in battle. Previous to this, because he had been born out of wedlock, he was also known as William the Bastard.
5. William II, who followed his father, William I, to the throne in 1087, was given which nickname?

The nickname was given either for his red hair or for his propensity for anger.
6. Henry I, who followed his brother, William II, to the throne in 1100, was called "Beauclerc", which means:

Richard spent only six months of his ten-year reign in England, spending his time instead fighting various battles in other countries.
8. Edward I, who ruled from 1272 to 1307 AD, was known as____________.

So named because of his extensive service in the British Navy.
10. Which Queen had the title of "The Empress of India" bestowed upon her by Parliament?

Victoria's 64-year reign was the second longest in English history. She was given the "Empress of India" title by Act of Parliament in 1877, after the government of India had been transferred from the East India Company to the Crown. By the end of her reign in 1901, the British Empire was at its height, hence the apt phrase, "the sun never sets on the British Empire".
Source: Author chessart 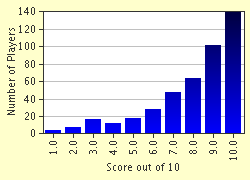