The Kings and Queens of England Quiz

Welcome to this quiz of little facts and trivia regarding the Kings and Queens of England of old.

Quiz Answer Key and Fun Facts
1. To whom was Henry V married?

Catherine was the daughter of Charles VI of France. Henry married Catherine in order to seal the Treaty of Troyes, a Treaty which made him the heir to the French throne.
2. Approximately how many illegitimate children did Charles II have?

One of which was the Duke of Monmouth. During the reign of James II (1685-1688) an attempt was made by Monmouth to take the crown for himself, but he failed and was later captured, tried and executed.
3. Who was Henry VIII's third wife?

Jane was the mother of Edward VI. Jane married Henry in 1536, the same year that Anne Boleyn was executed.
4. When did William I die?

William died after a fall from his horse in Nantes in his kingdom of Anjou. He is buried in St Stephen's Abbey, Caen, Normandy.
5. What nationality was Mary I's husband, Philip?

Mary and Philip were married in Winchester Cathedral in 1554. They had no children in their four years of marriage.
6. In what county was Richard I born?

Born at Beaumont Palace on 8th September 1157. Richard has a legendary reputation for being a hero King and great warrior, some believe, second only to St George, even though Richard only spent 9 months of his reign in England.
7. George III (1760-1820) was born in England.

George was born in 1738 at Norfolk house, St James's Square, London.
8. The close friend of Queen Anne, Sarah Churchill, had a well-known husband who was the Duke of...?

He was made Commander of the English forces on the Continent by Anne. Marlborough led Anne's troops into battle and defeated the French on three separate occasions. Although Anne's friendship with Sarah began to cool when Anne felt that Sarah's self-interest was the main motive for their friendship.
9. Who was the last king to die on a battlefield?

The last Plantagenet king died at the Battle of Bosworth Field (Leicestershire) on 22nd August 1485. Richard was rather unfortunately nicknamed 'Crookback'.
10. In what year did Queen Victoria celebrate her Diamond Jubilee?

Victoria reigned for nearly 64 years dying in 1901, at that time the longest ever by any British monarch.
Source: Author leanne27ukuk 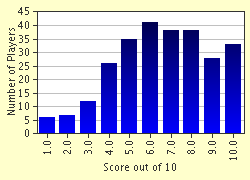 
Other Destinations
Explore Other Quizzes by leanne27ukuk