The British monarchy has a long and varied history. This quiz is just a short glimpse into a small part of that history.

Quiz Answer Key and Fun Facts
1. The wife of which King travelled to Holland to pawn the Crown jewels?

Henrietta Maria went to Holland to pawn the Crown Jewels to finance the Royalist side in the English civil war.
2. Which King was the target of the Gunpowder Plotters?

The Plot was 'discovered' in time to prevent it from being enacted, and those members of the plot who were not killed during their arrest were tried, convicted, and sentenced to be 'hung..drawn..and quartered'. Every year since the event is commemerated on November the 5th.
3. Lady Jane Grey was Queen for how long?

Poor Jane she never wanted to be Queen, she was simply the victim of her Father-in-Law's ambition.
4. King Henry I died of a 'surfeit' of what?

Lampreys were small eel-like creatures.
5. Queen Elizabeth I was anthophobic....so what did she fear?

Odd that the most famous Tudor Queen should fear the very symbol of her Royal house....The Tudor Rose.
6. Where did King George IV spend his wedding night?


Answer: In the Fireplace

George IV was so drunk at his wedding, that come the wedding night, he could only make it as far as the fireplace before collapsing, he was left there to 'sleep it off'.
7. What was the correct first name of Queen Victoria?

When she was born her uncle, King George IV, demanded she be named after her Godfather. Czar Alexander of Russia, instead of her parents preferred choice of Victoria, however when she became Queen, she reverted to her parents original choice....Victoria.
8. Which King in the 20th century was never crowned?

When Edward insisted on marrying Mrs Simpson, who was divorced, there was no other option but for him to abdicate, he did so before the date set for his coronation.
9. How were Queen Elizabeth I and Mary, Queen of Scots related?


Answer: They were cousins

Even though their lives were inextricably linked, there is no evidence that the two women ever met.
10. Which King was known as the 'Merry Monarch'?

When the monarchy was re-established after 20 or so years of rule by the puritian Oliver Cromwell. King Charles II abolished all the Cromwellian laws which had banned music and dancing, thereby re-estabishing not just the monarchy but 'Merry England' itself.
Source: Author kittyconner 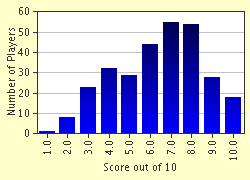