Quiz Answer Key and Fun Facts
1. Lady Jane Grey's reign only lasted for 9 days, but in which year did this occur?

She ruled from 10th July to the 19th July, 1553, hence her nickname, "The Nine Days Queen." Some historians argue that she ruled from the 6th July, the date of her predecessor, Edward VI's, death. However her reign was not officially proclaimed until the 10th.
2. John Lackland, or King John I, issued the Magna Carta at Runnymede in 1215, but in what year did he die?

He was born in 1166 and he reigned from 1199 to 1216. He was forced to issue the Magna Carta, or Great Charter, due to disagreements with Pope Innocent III and Englsih Barons about the rights of the King. It basically outlined what the King was entitled to do or not do and agreed that no one, not even the King, could be above the law.
3. How long did Henry VIII reign?

He is known for his six wives and he is proabably the most well recognised monarch of the House of Tudor. He was king from 1509 to 1547 and all his three children were future monarchs of England; Edward VI, Mary I and Elizabeth I.
4. Under whose rule did the plague and great fire of London occur?

Charles II ruled from 1660 to 1685. He was the son of Charles I, the last absolute monarch of England, and he who was executed during the Civil War in 1649. In 1660, after the death of Oliver and Richard Cromwell, Charles II was invited back to the throne. However, he no longer had absolute power. He was the first constitutional monarch of England, a description still used for Elizabeth II.

The Great Plague occured in London in 1665. It is thought to have wiped out nearly two thirds of London's population at that time. On 2nd September 1666, the Great Fire started in a bakery in Pudding Lane. The fire consumed most of London and also wiped out the plague, carried by vermin haraboured in cramped and unhygienic conditions. After this, London was completely redesigned by architect Sir Christopher Wren. However, his grandiose town planning scheme was not adopted and when rebuilt the street-plan was largely as before the fire.
5. Upon the death of which monarch did Victoria become Queen?

On 20th June 1837, 18 year old Victoria became Queen. She ruled for the next 63 years, 7 months and 2 days, the second longest reign of any British monarch.
6. In which year did the House of Hanover come on to the British throne?

The acts of Union were passed by the English Parliament in 1706 and by the Scottish Parliament in 1707. The two kingdoms were thereafter named just the Kingdom of Great Britain.
8. James I of England was the first James to rule England, but not the first to rule Scotland. He therefore ruled under a different title in Scotland but what was it?

Although the acts of Union were not signed until 1706 & 1707, he was in 1603 at the death of Elizabeth I, the heir to the English throne. He was already the King of Scotland but also ruled as the King of England.
9. Which British monarch took the step of changing the Royal Family's name from Saxe-Coburg-Gotha to Windsor?

In 1917, during World War I, George issued an order changing all his German names and title to a English ones, in response to intense anti-German feeling at the time.
10. How many of William the Conquerors' sons ruled the English throne?

In total, William had nine children by his wife Matilda of Flanders. He had four sons and five daughters. Only three of his sons outlived him, and only two of these, William Rufus or William II and Henry I, actually ruled England.
Source: Author jakehibberd 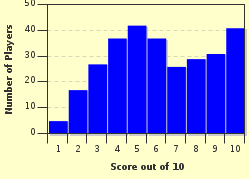 
Other Destinations
Explore Other Quizzes by jakehibberd