This is my last quiz concerning facts about the life of British monarchs. However, in order to include all kings and queens, I have increased the number of questions to 20. I hope you'll have fun!

Quiz Answer Key and Fun Facts
1. Edward VI, son of Henry VIII, ruled the country for only 6 years. He was nine years old when he was crowned king and died at the tender age of 15. How did he die?


Answer: he died of a lung disease

Young Edward died of a lung disease, tuberculosis. He didn't get along very well with his Catholic sister Mary and did not want her to ascend the English throne. Unfortunately for him, he died suddenly and so his sister went on to become queen... Mary I.
2. Mary I ruled from 1553 to 1558. She married Philip II, the king of Spain, and so had to help the Spanish fight the French. The people of England rebelled because of this marriage. Who was the leader of the rebellion?

The rebellion failed and Wyatt was executed. Either way, Mary's marriage was a failure. Philip II returned Spain soon after the wedding and was flirting with Mary's half-sister Elizabeth to ensure access to the throne if Mary died.
3. When Mary I of England died, her half-sister Elizabeth became queen. One of the many things she did during her reign was to raise a very strange tax. On what?

Unbelievable but true! But she is more famous for other things... Philip of Spain (who had been married to Mary I as you remember) tried to take the English throne with the attack of the famous Spanish Armada. Elizabeth's navy defeated the Spanish Armada with the help of Francis Drake. She is also famous for having her cousin Mary, Queen of Scots executed.
4. James I, son of Mary, Queen of Scots was the first king to rule both England and Scotland.

He was also known as James VI of Scotland. He is widely known because a famous plot against him failed. Some Catholics tried to blow up the king and the Parliament but one of them, Guy Fawkes, was caught in a cellar under the Houses of Parliament on November 5th, 1605. He was tortured and executed.
5. Charles I was accused of treason after having raised an army against the Parliament. He was found guilty and beheaded. Out of a total of 135 judges, how many voted for his death?

Charles lost the trial by only one vote! As he was about to be executed, he made a final speech in front of the spectators. His famous last words were: "All the world knows I never did begin a war with Parliament. I die a Christian of the Church of England. I will say no more." A moment later he was dead.
6. Charles II was the first king to rule after Oliver Cromwell's Commonwealth Protectorate. He had a very strange habit and believed that it would help him with his duties as king. What was this habit?


Answer: he rubbed the dust from Egyptian mummies into his body

He believed that by rubbing himself with the dust, a part of the greatness of the Egyptian kings would come to him! He actually survived the plague of 1665 but died 20 years later of a kidney disease.
7. James II ruled for 3 years and was not very popular. He was mostly known for his efforts to make England a Catholic country again. He once executed the Duke of Monmouth for leading a rebellion against him. However, after the beheading had taken place, King James had the Duke's head sewn back onto his body. Why?


Answer: the Duke never had his portrait painted

The Duke of Monmouth was a famous and important man and James thought it proper that people in the future should be able to know what he looked like. Unfortunately, the Duke had never had his portrait painted. As a result the king ordered that the Duke's head should be sewn in place so that he could finally have his portrait done.

The portrait of the Duke of Monmouth can now be seen in London's National Portrait Gallery.
8. William III married the Protestant daughter of James II, Mary II. They shared the throne for the first four years - then Mary died and William ruled on his own for a further eight years. What was William's title before he became king?

He was William of Orange, the Stadtholder ("Steward") of the Netherlands. He died in 1702 when he fell off his horse and broke his collar bone.
9. Anne I was queen during the period 1702-1714. How many children did she have?

Amazingly she had 17 children. Sadly all of them died when they were still babies except one named William who also died at the age of eleven.
10. George I could only speak English.

He spoke only German and French. As a result of this - and because George I seemed more interested to Germany - the Parliament practically were the ones who run the country during his reign. George I actually left the running of the country to Robert Walpole, who became Britain's first prime minister.
11. George II ruled from 1727 to 1760. He is famous for adding India and Canada to the growing British Empire. However, he and his wife were not very popular with the people of Britain because he too (like his father, George I) preferred Germany to England. What was the name of George II's wife?

George II was also the last king to have someone executed in the Tower of London - Lord Lovat, aged 80.
12. George III ruled for 60 whole years despite his periods of insanity. He bought himself a new palace to live in. What was the name of the palace?

One of the funny facts during his periods of insanity was that he thought that he was dead and wore black as a sign of mourning! George III is also known for losing the American colonies and defeating the French at Trafalgar and at Waterloo.
13. George IV, son of George III, was crowned king in 1820. He enjoyed eating and rich living and as a result died in 1830 from over-eating.

He actually died from the strain on his heart for being so fat. During his reign he had a poet locked in prison for having him called a "fat Adonis of fifty".
14. William IV was the third son of George III and came to the throne when he was 10 years old.

He was a bit older in fact - 65 years old to be precise. His wife is still remembered in Australia because a famous city is named after her... Adelaide.
15. Queen Victoria was one of the most famous monarchs worldwide. This is mainly because she was queen during the high peak of the British Empire. What was the name of her husband?

She married Albert and had nine children - when Albert died she spent the rest of her life mourning him. She even had his clothes laid out for him every day for forty years as if he was still alive!
16. Edward VII never really expected to become a king because his mother Victoria lived for so long. What was his nickname?

This is because he made an important peace treaty with France. Despite that, he was usually drinking, hunting and gambling.
17. George V, son of Edward VII, was crowned king in 1910 and ruled the country throughout the First World War. He felt that his name needed changing because it drew attention to his German connections and that fact that he was related to Kaiser William II, the German Emperor. How were they related?


Answer: they were cousins

George V also changed the German family name from Saxe-Coburg-Gotha to Windsor, which remains till this day.
18. Edward VIII came to the throne in 1936 but was never crowned because he gave up the crown for the sake of an American divorcee. What was her name?

He was the first and only British monarch to give up the throne for the sake of a woman.
19. George VI did not expect to become king since Edward VIII was the rightful heir. What was George's name?

Queen Victoria did not want anyone ever to be called King Albert after her husband's death. However, George VI was born on the anniversary of Prince Albert's death and so Victoria allowed him to be named Albert. However, when he became king he had to pick one of his other names. His full name was Albert Frederick Arthur George.
20. Elizabeth II came to the throne in 1952. Do you know what her nickname was as a child?

She was called Lilibet because that is how she pronounced her name as a baby!
Source: Author Warzycha 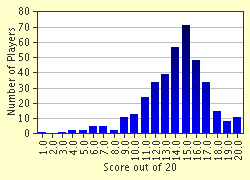