Another Scottish history quiz, this time on Scotland's hero king, Robert the Bruce.

Quiz Answer Key and Fun Facts
1. Robert is believed to have been born in 1274 in which castle?

Robert was the eldest son of Robert and Marjorie, Earl and Countess of Carrick. He had four full brothers, Edward, Nigel, Thomas and Alexander; and five full sisters, Isabella, Mary, Christina, Mathilda and Margaret as well as a half-sister by his mother's first marriage.

Some sources give his birthplace as Whittle in England.
2. Which title was held by Robert before becoming king?

Robert's mother, Marjorie, was Countess of Carrick in her own right, her husband became earl when he married her but renounced the title rather than swear fealty for it to John Balliol. When Robert became king the title passed to his brother Edward. After Edward's death the title then passed to Robert's son David and then when he became king to Robert Stewart, grandson of the Robert the Bruce and later Robert II. Since then the title has been held by the monarch's eldest son so that the current earl of Carrick is Prince Charles.

The other titles are also held by the heir to the British throne but were never held by Bruce.
3. What was the name of Robert's second wife?

Elizabeth was the daughter of the Earl of Ulster, one of King Edward of England's leading nobles. She and Robert were married in 1302. She was captured in 1306 and held in prisoner in England until 1314. She was the mother of David II.

Isabella of Mar was Robert's first wife, the mother of his eldest daughter, Marjorie. Johanna of England, sister of Edward III, was David II's first wife. Lady Catherine de Borough is a character in Jane Austen's "Pride and Prejudice".
4. Robert was not the only royal in the Bruce family. Of which two countries were his brother and sister king and queen?

Robert sent Edward, his only surviving brother, to Ireland in 1315 to try to create a second front to distract the English. The lesser Irish kings named him High King of All Ireland the following year but he was killed at the Battle of Faughert in 1318.

Robert's eldest sister, Isabella, was the second wife of King Eric II of Norway.
5. What happened at Greyfriars Kirk in Dumfries on 10th of February 1306?

Robert met with his arch-rival, John Comyn of Badenoch (often called the Red Comyn) in the church. Comyn and Bruce had served together as Guardians of Scotland during the ten year period Scotland was without a king, representing the two most powerful Scottish factions. They argued over Comyn's betrayal of Bruce, daggers were drawn and Robert stabbed Comyn. He was unsure at first that he had killed Comyn and one of his supporters entered the church to "make sure". Robert was crowned King of Scots at Scone six weeks later but was excommuincated by the Pope for having murdered someone within a Church.

Like many of the Scottish nobles, Robert's support for the Scottish cause was inconsistent, backing first the English and then the Scots and then the English again. The murder in Greyfriars marked his final break with the English cause. From then on he never swerved in his quest for Scottish independence.
6. Which member of the MacDuff family played an important role in Robert's coronation?

The MacDuff earls of Fife had traditionally had the role of placing the monarch on the Stone of Destiny. Isabella MacDuff was the sister of Duncan, Earl of Fife and the wife of John Comyn, Earl of Buchan (a relative of the John Comyn that Bruce had murdered), both of whom opposed Bruce and supported the English (Duncan was a minor and was living in England).

In her brother's absence, Isabella was determined to perform the MacDuff family role. She actually arrived at Scone too late and the coronation was run through again 48 hours after the original ceremony to allow her to take part.

She was captured by the English along with Robert's wife, daughter and sisters and was imprisoned in a cage on the side of Berwick Castle for six years until she was moved to a nunnery.

She is last heard of in 1313 and as she was not returned to Scotland with the rest of the Scottish captives after the Battle of Bannockburn it is assumed she had died by the time of Bruce's victory.
7. At which battle shortly after his coronation was Robert soundly beaten?

Robert was unhorsed and almost captured several times during this battle. He managed to escape, however, and as far as possible avoided pitched battles with the English in future. Having said that, all the other battles mentioned in this question were victories for Robert.
8. Robert's brother Edward entered into an agreement with the Governor of which castle which led to the Battle of Bannockburn?

Although the rules were not always adhered to during the Scottish Wars of Independence this was the Age of Chivalry, after all. By 1313 Stirling Castle was one of only three Scottish castles remaining in English hands (the others were Bothwell and Berwick). Edward Bruce was charged with taking it.

He entered into a bargain with the Castle Governor, Sir Philip Mowbray, that the castle would be surrendered to the Scottish forces if an English army had not come to relieve him by the following midsummer. Robert was less than pleased with this arrangement, having based his successful campaign to win control of Scotland on avoiding pitched battles where possible. Edward II of England responded to the bargain by bringing a huge (for the time) army northwards.
9. What were the approximate sizes of the Scottish and English armies respectively at the Battle of Bannockburn?

At the time this was the largest army ever fielded by a king of England and included 2500 heavy cavalry, 3000 archers and around 15000 infantry.
10. What was the name of the English knight killed by King Robert on the eve of the battle?

De Bohun spotted King Robert riding a small pony, inspecting his troops. Seeing an opportunity to influence the outcome of the battle, de Bohun charged at the king with his lance. Armed with only a small axe, Robert pulled his pony out of the way, rose up in his stirrups and brought the axe down on de Bohun's head.
11. And what was the name of the English knight given free passage back to England by Robert after the battle?

The oddly-named Sir Marmaduke was considered one of the greatest knights of the day. Out of respect, Robert decided not to ransom him as with so many other prisoners but allowed him to return to England unharmed. All the others were genuine knights in the English army.
12. King Edward II was captured by the Scots after Bannockburn.

When they realised the day was lost, the Earl of Pembroke and Sir Giles d'Argentan dragged the reluctant King Edward from the field to avoid his capture. They headed first for Stirling Castle but the Governor refused admittance on the grounds that under the terms of his agreement with Edward Bruce he would have to surrender the castle and the king with it. King Edward fled instead to Berwick. Robert would not spare enough troops to give chase because he could not believe an army so large as that of the English would not regroup.

In fact, the English army had been gripped by mass panic on seeing their king leave the field and what they thought were Scottish reinforcements arriving (in fact it was the Scots camp followers and servants) and had fled in disorder.

Although the English king was not captured his shield and Great Seal were, Robert returned these to England.
13. To whom was Robert's eldest daughter, Marjorie, married?

Walter and Marjorie's only child was Robert Stewart. On the death of his uncle, David II, Robert became the first king from the House of Stewart which was to hold the throne for the next 300 years.
14. In which year did Robert conclude a final peace with England?

The Treaty of Edinburgh-Northampton between Robert I of Scotland and Edward III of England recognised Scotland's independence. Robert died only a year later. Edward later renounced the treaty (on the grounds that he had been a minor when it was signed) and supported John Balliol's son Edward as pretender to the Scottish throne against his brother-in-law, David II, re-igniting the Wars of Independence. Hostility and rivalry would dominate relations between Scotland and England for centuries to come.
15. In 1320 the nobles, clergy and gentry of Scotland sent a letter to Pope John XXII declaring their support of Scottish nationhood and Robert (who had been excommunicated for his sacriligious murder of John Comyn) as their rightful king. How is this letter better known?

It is believed to have been penned by Bernard de Linton, Abbot of Arbroath and a staunch supporter of King Robert. It is one of the earliest declarations of nationhood and stated that if Robert should ever submit to the King of England then they would overthrow him and choose a new king.
16. Robert had three legitimate daughters, Marjorie was the eldest, who were the other two?

Marjorie was the only child of Robert's marriage to Isabella of Mar. Margaret and Matilda were two of the four children by his marriage to Elizabeth de Burgh. The others were David (who became David II) and John (who died in infancy). Robert also had at least five illegitmate children: Robert, Nigel, Elizabeth, Margaret and Christian.
17. William Lamberton was one of Robert's staunchest supporters throughout his reign. What position did Lamberton hold?

Despite his excommunication, Robert received firm backing from the Scottish clergy. The other positions were held by Robert Wishart, Sir Gilbert Hay and Sir Walter Stewart who were all also staunch supporters of Bruce.
18. Whom did Robert nominate to act as regent for his son David in the event of David succeeding as a minor?

Randolph was the son of Robert's half-sister. He had supported Robert but was captured at the Battle of Methven and switched allegience to the English. He was later recaptured by the Scots and switched back to Robert's cause. From then on he became one of Robert's most trusted and able captains. When Robert died in 1329, Randolph served as regent until his own death in 1332.
19. Which disease was Robert often believed to have suffered from?

Robert often suffered from bouts of debilitating illness. However, given the attitude of people of the time to leprosy it is thought unlikely that he suffered from this disease and that this story only arose after his death. It is now thought more likely he had scurvy.
20. When he died in 1329, Robert's body was buried next to his wife in Dunfermline Abbey. Where, however, was his heart buried?

Robert's heart was removed and taken on a crusade by his loyal captain, Sir James Douglas (known as the Black Douglas for his swarthy complexion and often used by mothers in the north of England to frighten their children). The heart got no closer to the Holy Land than Spain where Douglas was killed. The heart was returned to Scotland and buried at Melrose Abbey.
Source: Author alan03 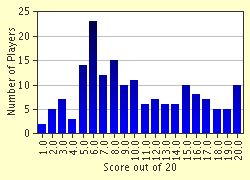 
Other Destinations
Explore Other Quizzes by alan03