This quiz was suggested by Windswept in the Author Challenges. You will find various questions on famous people associated with San Francisco, CA, and their work.

Quiz Answer Key and Fun Facts
1. We start on a not-so-happy note with O.J. Simpson, who was born in San Francisco in 1947. He is an American football player/actor who was accused of murdering his wife Nicole Brown and her friend Ronald Goldman in 1989, but do you know the name of the book that he wrote in 2006, based on the event of the murders?

The book is described by O.J. Simpson as a hypothetical description of the murders; i.e. how it would have happened "if he did it". He was acquitted of the murders in 1995. The release of "If I Did It" was canceled very quickly after it had been announced, however it was leaked online in 2007, and 400,000 copies had been physically printed. Rights for the book were awarded to Ronald Goldman's family, who re-printed the book under the name "If I Did It: Confessions of the Killer" and the family added comments into the original manuscript, which was left unchanged.
2. Ansel Adams was a photographer and conservationist born in San Francisco in 1902. His photos are popular, and are still reproduced in posters, calendars and other prints, despite the fact that he sadly died in 1984. Do you know the name of his wife?

Adams' famous crooked nose was caused by an aftershock of the 1906 San Francisco earthquake, when he was four; he was thrown into a garden wall, and the break was never corrected.

He received many awards both during life and after his death, including Doctor of Arts in both Harvard and Yale Universities, and a place in the California Hall of Fame (at The California Museum of History, Women, and the Arts).
3. A more famous face: Clint Eastwood was born in San Francisco in 1930, weighing in at a huge 11 pounds! He has Scottish, English, Irish, and Dutch ancestry in his family. However, can you tell me which of these movies that he has starred in, he described as "probably the lousiest Western ever made"?

"Ambush at Cimarron Pass" was released in 1958.

Clint's first marriage was to Maggie Johnson (from 1953 to 1984) and his second to Dina Ruiz, whom he married in 1996. He had had two domestic partners prior to his second marriage: Sondra Locke (from 1975 to 1989) and Frances Fisher (from 1990 to 1995).
4. Robert Frost was an American poet born in San Francisco in 1874. He is still known for his use of American colloquialism and his poems about rural life. Can you tell me how many times he won the Pulitzer Prize for Poetry?

Frost's life was unfortunately very tragic: both of his parents had died by the time he turned sixteen. He had six children, but outlived four of them - including a daughter who died three days after birth, and a son who died at eight. His wife suffered from heart problems, and had breast cancer - she died of heart failure. Mental illness ran in his family - as well as both he and his mother suffering from depression, both his younger sister, Jeanie, and one of his daughters, Irma, had to be committed to mental institutions; Jeanie had to be committed by Frost himself.
5. Dianne Feinstein was the first female mayor of San Francisco, and served from 1978 to 1988. She was also the first female president of the San Francisco Board of Supervisors; she has achieved other "firsts" including being the first woman to serve in the senate from California. Do you know which mayor she succeeded after he was assassinated?

Mayor George Moscone and Supervisor Harvey Milk were assassinated by Dan White in 1978. White was a fellow politician who had resigned from the Board Of Supervisors. Mayor Feinstein discovered Supervisor Milk's body, and was the one to announce the deaths.

In the 2008 film "Milk", which was a biographical film about Supervisor Milk, Mayor Feinstein was featured in archival footage announcing the deaths.
6. The Zodiac Killer was a serial killer who killed five people around the San Francisco area in the late 1960s. He sent letters to the press, taunting them, and used a symbol of a circle with a cross marked through it to mark his correspondence. Was his identity ever discovered?

The confirmed victims of the Zodiac Killer are one woman and four men aged between 17 and 29. There are others who are suspected to have been killed by him also. Including the cryptogram described in the question, he sent four in total in his letters. The other three have not yet been deciphered. There have been Zodiac copycats in both New York City and Tokyo.
7. Isadora Duncan was a dancer, born in San Francisco in 1877. She is considered today as the mother of modern dance, and is unfortunately still widely remembered for the freak accident that killed her at the age of 50. Do you know the name of the French-Italian mechanic, in whose car she was a passenger in at the time of her accident?

Isadora was in Nice at the time of her death. She had a love of long flowing scarves and was wearing one in the car while traveling. The scarf was long enough to come out of the car and get caught around one of the wheels and rear axle. There are several causes of death given by various sources; some say she died instantly upon hitting the pavement, others that she died of strangulation as she was nearly decapitated by her scarf.
8. Carlos Santana is a Mexican-American rock musician, whose family moved to Tijuana, a city on the border between Mexico and California, before finally moving to San Francisco. Carlos' father was a mariachi violinist, and at five he learned to play the violin too, and the guitar at age eight. Can you tell me the name of the Mexican city the Santana family came from, in which Carlos was born?

Autlán de Navarro is a city in the state of Jalisco in Mexico.

Carlos has opened a chain of Mexican restaurants with chef Roberto Santibanez. There are currently five restaurants, which are named Maria Maria, located in various US states.
9. Donald Fisher is a businessman who was born in Cutsdean, California, but spent his childhood in San Francisco. He co-founded the Gap clothing stores. When he attended university, a professor caught him cheating, awarded him an F, but did not have him expelled. Can you tell me in which college of the University of California this happened?

Fisher graduated from Berkeley in 1951. Despite the cheating, he was awarded Alumnus of the Year in 2007.

His net worth is estimated at around 3.3 billion US dollars. He and his wife Doris began to collect contemporary Western art, and Fisher was declared one of the top ten art collectors in the world.
10. Lisa Bonet is an actress born in San Francisco in 1967, who starred in "The Cosby Show" and the spin-off show "A Different World", and was married to Lenny Kravitz (1987-1993). Around 1992, she legally changed her name, although she still uses the name Lisa Bonet for her entertainment career. Which of these did she change her name to?

Lisa eloped with first husband Lenny Kravitz on her 20th birthday; they have a daughter together, Zoe Isabella. She is now married to "Baywatch" actor Jason Momoa, with whom she has two children, a daughter Lola Iolani (one of the options in the question!) and a son Nakoa-Wolf Manakauapo Namakaeha. 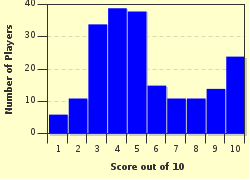 
Other Destinations
Explore Other Quizzes by reeshy