The Music Lives On Trivia Quiz

Some famous artists died young, just as they were entering their peak. I will give a small description of an artist whose legacy lives on to music fans around the world.

Quiz Answer Key and Fun Facts
1. I was the bass player for one of the biggest rock bands of the 1980's and died in a traffic accident just after the release of our third album.

Cliff Burton of Metallica died in a car accident on September 27, 1986, just as Metallica were heading to Denmark to perform a concert. Burton's death came just after the release of Metallica's third album 'Master Of Puppets'. Jason Newsted replaced Burton in Metallica, and was bass player from 1987 until 2001. Rob Trujillo took over from Newsted as bass player for Metallica on the 'St Anger' album, and James Hetfield is the lead singer of Metallica.
2. I was in a band that had a huge single called 'No Rain',and died of a drug overdose in 1995.

Shannon Hoon was a member of Blind Melon, who were formed in 1989. Blind Melon released their self titled debut album in 1991, and featured 'No Rain'. Even after Hoon died of a cocaine overdose on 21 October 1995, Blind Melon continued to release 'Nico' in 1996, and officially disbanded on 4 March 1999.
3. I was in a Seattle grunge band in the late 1980's. After my death, Soundgarden lead singer Chris Cornell released an album as a tribute to me.

Andrew Wood was lead singer of Mother Love Bone, which also featured Stone Gossard and Jeff Ament, both of whom would be members of the band Pearl Jam. After Wood's death by drug overdose on 19 March 1990, Gossard and Ament, along with Soundgarden's Chris Cornell and Matt Cameron and a then unknown Eddie Vedder, released Temple Of The Dog in 1991.

This was a tribute album to Wood, and featured the single 'Hunger Strike'.
4. I was in a successful Australian band until my death in 1997. The band now has a new singer called J.D. Fortune.

Michael Hutchence was the lead singer of INXS until his death from suicide in a Sydney hotel on 22 November 1997. INXS was formed in 1977 and released 10 albums under Hutchence, their biggest selling album being 'Kick' in 1987. Since Hutchence's death, INXS searched for a new singer through a reality television show called 'RockStar:INXS' in 2005, and subsequently chose Canadian J.D. Fortune to replace Hutchence. INXS released 'Switch' in 2005, featuring the singles 'Pretty Vegas' and 'Afterglow'.
5. I was a touring keyboardist for a rock band from Chicago and died of a heroin overdose with the bands drummer.

Jonathan Melvoin was the keyboardist for the Smashing Pumpkins during their 'Mellon Collie And The Infinite Sadness' tour. Melvoin and Pumpkins drummer Jimmy Chamberlin overdosed on heroin in a hotel room in New York City on 12 June 1996. Melvoin died at the scene and Chamberlin was fired from the Smashing Pumpkins. Sarah McLachlan's single 'Angel' was inspired by Melvoin's death.
6. I was a member of a punk band and all the band members adopted the same last name. I was the first band member to die.

Joey Ramone was the lead singer for the Ramones. Joey (real name Jeff Hyman) died of lymphonia on 15 April 2001, and this was closely followed by the deaths of bass player Dee Dee Ramone (real name Douglas Colvin) from a heroin overdose on 5 June 2002, and by guitarist Johnny Ramone (real name John Cummings) on 15 September 2004 from prostate cancer.The Ramones were one of the biggest punk bands of the 1970's and 1980's with hits such as 'I Wanna Be Sedated' and 'Blitzkrieg Bop'.
7. I was a member of a grunge band from Seattle during the late 1980's and the 1990's. I died in 2002 on the same day as the death of another rock pioneer.

Layne Staley was the lead singer for Alice In Chains. Staley had an addiction with heroin, and this was having an effect on the lyrics for Alice In Chains. Staley died of a drug overdose on 5 April 2002, 8 years to the day since Nirvana frontman Kurt Cobain was found dead in Seattle.
8. I was in a punk band that got its name from a character in the Stephen King novel 'It'. I committed suicide in 1996.

Jason Thirsk was the bass player for Pennywise. He left the band temporarily in 1996 to try and quit drinking, but then committed suicide on 29 July 1996. He was replaced in the band by Randy Bradbury. Pennywise formed in 1988 and got their name from the character Pennywise the Dancing Clown in Stephen King's novel 'It'.
9. I was only in this band for 2 years, but they turned out to be one of the most influential punk bands ever. I committed suicide in a death pact with my girlfriend.

Sid Vicious was the bass player for the Sex Pistols between 1977 and 1978. He joined the Sex Pistols after previous bassist Glen Matlock left the band, and helped record their debut album 'Never Mind The Bollocks, Here Is The Sex Pistols', which featured 'Anarchy In The UK' and 'God Save The Queen'.

After leaving the group in 1978, Vicious was arrested for the suspected murder of his girlfriend Nancy Spungen. Before awaiting trial, he overdosed on heroin and died on 2 February 1979. It was later found in Sid's suicide note that both himself and Nancy had entered a death pact, and he was holding his end of the bargain.
10. I was the lead singer of the most influential grunge band of the 1990's and died from a self inflicted shotgun wound to the head.

Kurt Cobain was the lead singer for Nirvana. Nirvana's single 'Smells Like Teen Spirit' and the subsequent album 'Nevermind' marked the beginning of what rock music of the 1990's would become. The popularity of Nirvana and grunge music was too much for Cobain, who shot himself in the head around 5 April 1994, laying in his Seattle home for 3-4 days before his body was found. Nirvana's drummer Dave Grohl is the lead singer of rock band the Foo Fighters.
Source: Author knowmyenemy 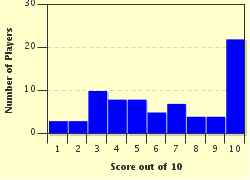 Related Quizzes
1. Gone Before Their Time #1 Very Easy
2. Gone Too Soon, Yet Not Forgotten Easier
3. They Died in Their 20s Tough
4. Dying Can Sure Give You The Blues Easier
5. They Died in Their 30s Average
6. Short Lives Difficult
7. Famous People Who Died Before Age 21 Tough
8. They Didn't Make It Past 39 Years Old Average
9. Dead Before 27 Average
10. To an Athlete Dying Young Average
11. Dead Too Soon: Famous Folks Who Died Young Tough
12. Chez '27' Average


Other Destinations
Explore Other Quizzes by knowmyenemy