This quiz is about the Islamic Prophet Isa (RA) or Jesus Christ, as mostly referred to by Christians. See how much you know.

Quiz Answer Key and Fun Facts
1. How many times is Jesus Christ mentioned in the Quran?

One verse from surah "Al-Baqarah" is:
"We gave Moses the Book and followed him up with a succession of messengers; We gave Jesus the son of Mary clear Signs and strengthened him with the holy spirit. Is it that whenever there comes to you a messenger with what ye yourselves desire not, ye are puffed up with pride?- Some ye called impostors, and others ye slay!"
2. Who was the Mother of Christ?

According to the Quran, Mary gave birth to Christ without the contribution of a male. It was considered as a miracle of God.
3. According to the teachings of Islam, to whom was Jesus Christ sent to preach the message of God?

His main purpose was to tell the people to obey God and follow His principles. The Gospels were meant to aid in this mission.
4. Also known as "The Gospels", what holy scripture was revealed to Jesus?

Muslims believe that only four holy scriptures have been revealed. One of them was Injil. The other three are Zabur (also known as the Psalms), Tawrat (also known as the Torah) and Quran.
5. According to Islamic beliefs, when was Jesus Christ crucified?


Answer: He was never crucified

It is believed universally by Muslims that Jesus was not crucified. This is emphasized in the Quran, where it states,
"That they said (in their boast), 'We killed Christ Jesus the son of Mary, the Messenger of Allah'- but they killed him not, nor crucified him, but so it was made to appear to them, and those who differ therein are full of doubts, with no (certain) knowledge, but only conjecture to follow, for of a surety they killed him not-Nay, Allah raised him up unto Himself; and Allah is exalted in power, wise" (Quran 4:157-158).
6. Do Muslims refer to Jesus Christ as God?

They only consider him as a prophet of Allah -- a very holy man, but only a man.
7. In Islam, it has been foretold that Jesus will return to earth when the day of judgement or doomsday will be close at hand. He will then join hands with "Mahdi" in a fierce battle with whom?

Dajjal is considered an evil figure in Islam. He will falsely proclaim himself as the messenger of God. Some signs of his arrival are that the rulers will be corrupt, the scholars will be hypocrites, adultery will be common, and the deceiving and liars will be respected.
8. According to the Quran, if a person considers Christ as God or son of God, he has committed what act?

It is mentioned in one verse of the Quran:
"In blasphemy indeed are those that say that God is Christ the son of Mary. Say: 'Who then hath the least power against God, if His will were to destroy Christ the son of Mary, his mother, and all every - one that is on the earth? For to God belongeth the dominion of the heavens and the earth, and all that is between. He createth what He pleaseth. For God hath power over all things.'"(Qur'an 5:17)

In Arabic, the term used for Polytheism is "Shirk". It means "To consider anyone god other than the God, Allah."
9. Muslims generally believe that when Jesus Christ is resurrected, he will declare himself as the son of God.

Muslims believe that Christ will be resurrected as a normal human being and he will fight alongside "Mahdi" against "Dajjal".
10. In Islamic eschatology, who will kill Masih ad-Dajjal at the end of time?

Dajjal is also called the "Antichrist". The prophecy is that Jesus Christ will kill him by piercing his chest with a spear.
Source: Author speeddemon_1 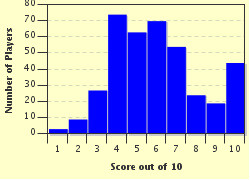 
Other Destinations
Explore Other Quizzes by speeddemon_1