Although I've borrowed the title of the TV show starring Mel Smith and Griff Rhys Jones, there's no comedians here, only cricketers! How many Smiths and Joneses can you identify?

Share on Facebook
Share on Twitter
Share by E-Mail
Author
rogerw1nz
Time
5 mins
Type
Multiple Choice
Quiz #
116,848
Updated
Dec 03 21
# Qns
10
Difficulty
Average
Avg Score
6 / 10
Plays
627
This quiz has 2 formats: you can play it as a or as shown below.
Scroll down to the bottom for the answer key.

Quiz Answer Key and Fun Facts
1. This Smith made his Test debut in the famous tied Test in Brisbane in 1960, and played only five Tests in a short career. Who is he?

Cammie Smith played for the West Indies. In 1992, he became an ICC Match Referee, and officiated for nearly ten years in this role.
2. This Jones set a world record partnership for the 3rd wicket. He scored 186 in a partnership of 467 with his captain, against Sri Lanka in 1991.

Andrew Jones and Martin Crowe put on 467 for the 3rd wicket for New Zealand against Sri Lanka at the Basin Reserve, Wellington. Crowe was out for 299.
3. A South African-born 'Smith', played for England from 1988 to 1996, scoring nine Test centuries. Who is he?

Robin Smith was born in Durban, South Africa, but moved to England when a teenager. He had a top score of 175 in his 62 Tests and also played 71 ODIs for England. He played for Hampshire in English county cricket, and captained that county with distinction.
4. After batting for eight and a half hours in a Test in India in 1986, this Jones had to be treated in hospital after the completion of the innings for exhaustion. What is his first name?

In the 1st Test against India, Australian Dean Jones scored 210 off 330 balls and hit 27 fours and 2 sixes. Dean Jones played 52 Tests in his career, hitting eleven centuries. In 164 ODIs he hit seven centuries.
5. Ian Smith was New Zealand's wicketkeeper in 63 Tests between 1980 & 1992 and is a TV cricket commentator. What was his highest Test score?

Jeff Jones toured the West Indies in 1967/68 with the M.C.C. His finest hour was undoubtedly in the final Test at Georgetown, Guyana. Jones was no great shakes as a batsman, but he successfully blocked out the final over to secure the series for England.
7. This Smith scored two consecutive double centuries in tests against England in 2003. Who is he?

Graeme Smith made also made 151 and Herschelle Gibbs 228 when they set a South African record partnership for any wicket (368) in the 2nd Test against Pakistan in January 2003.
8. Invalided out of the Ashes tour of Australia in 2003 after rupturing a ligament in his right knee, this Jones has played only two Tests and taken five wickets for England up to the start of the 2003 season. What is his name?

Born on Christmas Day, 1978, Simon Jones from Glamorgan is a very fast bowler and an exciting lower order batsman, hitting 44 off 43 balls in his first Test innings in 2002.
9. This Smith played eight Tests for England from 1983 to 1986, having a top score of 91. His younger brother also played for England. He was a prolific scorer for his county, Hampshire, for whom he played for many years, until he retired to take up the position of Chief Executive of the Western Australian Cricket Association. What is his first name?

Chris Smith also played for Natal and Glamorgan, and in his career hit 47 centuries and totalled over 18,000 runs in first class cricket. Robin Smith is his young brother.
10. Smith or Jones: what will this one be? After being born in England in 1972, this cricketer made her Test debut for Australia in 1998, and scored her first Test century in her first Test innings. Is Melanie a Smith or a Jones?

Melanie Jones was born in Barnstaple, Devon and scored 131 against her mother country on debut in Guildford.
Source: Author rogerw1nz

This quiz was reviewed by FunTrivia editor gtho4 before going online.
Any errors found in FunTrivia content are routinely corrected through our feedback system.
Most Recent Scores
Jan 24 2023 : Guest 1: 3/10
Dec 16 2022 : Guest 146: 4/10 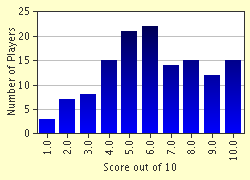 
Other Destinations
Explore Other Quizzes by rogerw1nz