This quiz will mark not only the end of a 85 year curse (Champs in '04); but will it also mark the hardest Red Sox quiz ever created?

Share on Facebook
Share on Twitter
Share by E-Mail
Author
Optimo52Pats
Time
6 mins
Type
Multiple Choice
Quiz #
154,861
Updated
Dec 03 21
# Qns
10
Difficulty
Difficult
Avg Score
5 / 10
Plays
530
This quiz has 2 formats: you can play it as a or as shown below.
Scroll down to the bottom for the answer key.

Quiz Answer Key and Fun Facts
1. In 1986, with the AL East in hand, which team did the Sox finish the year off with, by getting swept at home in 4 games?

The Red Sox clinched the East on September 27, behind a Bruce Hurst six-hitter for a 2-0 win over Toronto.
2. The Red Sox set a team record for longest winning streak with 15 games. What year did this occur?

From April 25 to May 10, 1946 the Red Sox enjoyed a 15-game tear which propelled them into first and they never looked back. Coincidentally, a worthless team known as the Yankees handed them both losses, which the streak was sandwiched between.
3. In 1986, the Red Sox had the 11th best record ever in one-run games for a season, as well as the team record. What was their record in one-run games that year?

It certainly helps your one-run game record, when you find a replacement closer in August in Calvin Schiraldi. Schiraldi would convert 9 of 11 save opps. with a sparkling 1.41 ERA. However Schiraldi would end up losing both games 6 and 7 in the World Series.
4. What was the name of the stadium the Sox played in prior to Fenway Park (Northeastern Univ. was built on top of it)?

The Sox moved to Fenway in 1912. It's a good thing they did or they might still be dealing with a center field wall that stood 635 feet away. Interestingly, this place was the site of the 1st AL-NL World Series game in 1903, and was also home to the first modern perfect game in 1904 by Cy Young.
5. We all know Joe Morgan of ESPN and formerly of the Reds, but what was interesting about the Joe Morgan, that took over for John McNamara midway into the 1988 season, and managed the Sox from '88-'91?


Answer: Morgan won 19 of his first 20 games with Boston

Not the same Joe Morgan the Hall of Famer, but this Joe won 12 in a row to start off his managerial career in '88, leading Boston to its 2nd AL East title in 3 years. Morgan saw limited action as a utility man with 5 different teams, but never with the Yankees.
6. These jersey numbers added together of Mike Torrez, Bret Saberhagen, Johnny Pesky, and Dom DiMaggio, equal what?

The Red Sox finished 62-100 in 1965, forty games behind the 1st-place Twins, yet 3 games ahead of the last place KC Athletics.
8. Out of the 5 starting pitchers from the World Series Champs of 1918, we know Babe Ruth headed to the Yankees, which pitcher did NOT sign with the Yankees within the next 3 years?

Mays was traded in 1919 over a dispute with owner Harry Frazee. Jones and Bush went later in a 1921 trade. Leonard went to the Tigers in 1919.
9. What was going on in Red Sox nation, on the day Christopher Trotman (Trot) Nixon was born?

This quiz was reviewed by FunTrivia editor Nightmare before going online.
Any errors found in FunTrivia content are routinely corrected through our feedback system.
Most Recent Scores
Jan 12 2023 : Guest 24: 3/10
Dec 10 2022 : Guest 73: 0/10 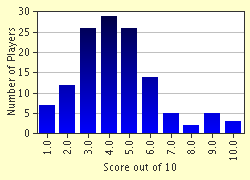 
Other Destinations
Explore Other Quizzes by Optimo52Pats