There are 10 questions that relate to the FIFA laws of the game. There will be questions regarding basic laws, as well as situations that occur in the game of soccer.

Quiz Answer Key and Fun Facts
1. A United player is dribbling the ball towards City's goal. Suddenly, his shoe accidentaly falls off. With only one shoe on, he decides to take a shot and he scores a goal. The referee should use what method of restarting play?

In the FIFA laws of the game, Law 4 states that if a player's shoe accidentally falls off, the play should keep going. There is no need to stop play. There is no infringement that was occurred and this goal is awarded.
2. Prior to the rule change in 2019 -- when a dropped ball was awarded, only one person from each team could participate in the restart method of a dropped ball.

In 2019, the dropped ball was no longer competitive. If it's in the penalty area, it's dropped for the defender, and in any other area it's for the team which last touched the ball.
3. To replace a player with a substitute, how many conditions must be observed?

These are the 7 conditions.
4. A United player is on a breakaway with an obvious opportunity to score a goal. He dribbles past the City goalkeeper and has an open net to shoot at. Suddenly, a City player fouls the United player, who falls to the ground. The infringement occurred inside the penalty area. What card should the City player receive, and how should the play be restarted?


Answer: Red card the City defender and have a penalty kick for United

This is an infringement that must be dealt with a red card. Since the penal foul took place inside the penalty area, play must restart with a penalty kick for United.
5. The referee has called for a dropped ball. One player from City and one player from United are contesting for the ball. The referee drops the ball and it touches the ground. However, with very strong wind occurring, the ball doesn't get touched by anyone and rolls past the touchline. How should the referee restart the play?

Law 8 states that the ball is dropped again only when it is touched by a player before it makes contact with the ground. It is also dropped again if the ball leaves the field of play after it makes contact with the ground, and without a player touching it.
6. United and City are competing in a match when suddenly, a spectator blows his own whistle. The United player who had posession of the ball thought the referee blew his whistle, so he picks up the ball. What is the correct restart method?

Law 5 states that if a spectator blows his/her whistle and the referee considers that the whistle interfered with play, he must stop the match. He should restart the play with a dropped ball from the position of the ball when play was stopped.
7. The assistant referee raised his flag in his right hand to signal a foul. However, he has to switch the flag into his other hand, which is the left one. How should he switch the flag into his left hand?


Answer: Switch the flag under the waist

Law 6 states that if circumstances change and the other hand must be used for the next signal, the assistant referee should move his flag into the opposite hand below the waist.
8. A United player scores a goal. The fans are cheering and the players are happy. The United player decides to leave the field of play and jump into the crowd to celebrate his goal. What card should he receive?

According to Law 12, leaving the field of play is not an offence. The player must return to the field as soon as possible.
9. Impeding (or obstructing) a player results in a direct free kick.

Under law 12, Impeding results in an indirect free kick.
10. If the ball rebounds off the corner flag post, the ball is still in play. 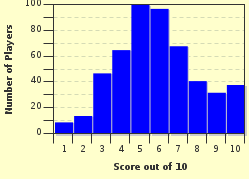 
Other Destinations
Explore Other Quizzes by xizzlex