You are the coach of a soccer team, in the grand final. As the game goes on, you must make some tactical changes and decisions that will affect the game!

Quiz Answer Key and Fun Facts
1. The morning before the game, you look in the paper and see the other team's formation. It is a 4-3-3 formation. You can see the weakness in that formation immediately. What is the weakness and what formation would best exploit that weakness?

Generally speaking, if a team has three players in midfield and three playing in a forward position, they will be weak defensively on the wing. So to exploit that, you'll have 2 players in the middle of midfield and two out wide. That means you outnumber the opposition in the midfield, which is where games are won or lost, and you will enjoy the extra man there.
2. Your squad has just come off a tough and exhausting semi-final. What should you do today (The day before the grand final)?


Answer: Send them to a day spa

At this stage of the season, they will most likely be at peak fitness and the best thing to do is to relax their tired bodies from the game before. If you train the day before, you run the risk of burning them out.
3. It is the night before the final, your squad is in the hotel waiting to find out what they will be doing tonight. Which is the best thing to do?


Answer: Have a healthy pasta dinner with the team, with a team talk afterwards and a decent night's sleep

A quiet night before the game is best, so they are completely rested. The partying can come after they win the final. And the yelling at them should come (if at all) on match day, so they'll be fired up. If you do it the night before, they won't sleep and the effect will have worn off the next day.
4. The opposition coach says at the press conference, "We're the underdogs here, the other team has won, we're just hoping not to get embarrassed". What do you say?


Answer: "Well, we'll take this game as it comes and just go out there and try our best. We're sure the other team will come out firing"

If a coach ever says something like that, he is trying to lull the other coach into a false sense of security so the other team will be over confident. Do not ever fall for it, just go about the game as normal, and do not ever expect an easy game.
5. You have decided to rest your star player for the first half, so he can come on as a substitute ten minutes before half time and destroy the opposition. The player has not thought about it like that and threatens to leave the club and not play unless he gets his starting spot back. What do you do?


Answer: Tell him why you're leaving him off, and if he doesn't like it, he won't play at all, as no player is bigger than the team

This does tend to happen when players start to see themselves as bigger than the club, and the best thing is to be honest with them, and not to let them get too big for their shoes.
6. An hour before kick-off, your regular goalie complains of back pains. You cannot bring another player in, so what do you do? (You have a substitute goalie on the bench)


Answer: Give him treatment, if it works, start him. If not, start the substitute 'keeper and put your regular goalie on the bench just in case

Injuries are part and parcel of soccer, the only thing you can do is deal with them as they happen. It's not the keeper's fault he got injured, and you can't yell at him, not if you want him to play next season for you. There's no point in dropping him altogether, not when you can't bring in a replacement.
7. The game is kicked off! Your ploy of playing with the wide players seem to be working, as you create chance after chance, but your team just can't seem to convert their opportunities into goals. You go close to scoring a few times, what do you do?


Answer: Leave the team as it is

If you're creating plenty of chances, and they're going close, it's only a matter of time before they get that ball in the back of the net! If possible, you shouldn't make any changes until at least halftime, unless something is clearly wrong. The worst thing to do at this moment would be to panic and make changes, it would disrupt the balance of the team.
8. The half time whistle blows, the scores locked at 0-0. Your team has had better ball possession and had 6 shots at goal. The opposition has only had one shot, and it was well saved by the substitute keeper. Your regular keeper's back feels better. What should you do now?


Answer: Leave the team as it is

There's no point wasting substitutions. If it ain't broke, don't fix it. The game could well go into extra time, and if that happens, you want as many fresh legs as you can get. So if the team isn't doing anything wrong, just leave it.
9. As the second half kicks off, the opposition side have made two changes and changed their formation to a 3-5-2 formation. They are no longer as vulnerable on the wings anymore. What do you do?


Answer: Leave your team as it is

They have only one substitution left, which means they're getting desperate and trying to finish off the game before fulltime, so it doesn't go into extra time. The formation you are in, the 4-4-2 is a well balanced side, and because the opposition will be pushing forward trying to score, you are more likely to be able to score from a counter attack, so you should leave it as it is and not change tactics at all.
10. The referee makes a blatantly wrong call, resulting in a penalty to the opposing side, which they convert. 1-0! You're a goal down with 30 minutes left. What do you do?


Answer: Put your star player on, taking off the more tired striker and tell him to chase after everything

The other team got lucky, now it's time to put your impact player on. You shouldn't panic, have faith in your team. With half an hour left, your substitution should just run after everything until there's no petrol left in the tank.
11. Your substitute makes a great pass to your striker and he scores! 1 all! What a great tactical decision! What now?


Answer: Keep playing the way you have been

Well done! The game is back in your hands. Now, if your team has been dominating all game, chances are, you're doing the right things. So keep playing the way you are, with a good balance between attack and defence. If you go all out attacking, the other team could make a quick counter attack and finish your season. If you go all out defensively, you run the risk of not taking advantage of the fact the other team has to go all out attacking due to the fact they only have one substitution left.
12. Your team keeps playing well, you keep creating chances, but the opposition keeper has been playing brilliantly all game. The full time whistle is blown. The score is 1-1, so the game must go into extra time. Which do you do now?


Answer: Make one substitution in the midfield, taking off your most tired player

Just making the one change is enough, you should save the last one for the second spell of extra time or in case one of your players gets injured.
13. Extra time is kicked off! After about 8 minutes, one of your players gets injured. Lucky you saved a substitution! You use up your last change. The opposition team has still got one change left in hand, and at the end of the first session of extra time, no one has scored. Remember, in extra time, it's the golden goal rule. Whoever scores first wins the game. What now?


Answer: commit to neither attack or defence

If you put down commit to attack, you must have forgotten that if the opposition score just one goal from just one chance, they win immediately. Commiting to attack increases the chances of that happening. And if you commit to defence, you are losing valuable opportunities to score. A balance of the two is essential at this stage.
14. The second spell of extra time ends. You have to pick your penalty shoot out teams. You have the five best players at taking penalties to choose from. What is the best order for them to kick?

You must make the first and second kicks, to place pressure on the opposition. Then you play your worst kickers in the middle, and if it comes down to the last kick, you want someone dependable, don't you?
15. Congratulations! You won the penalty shoot out 4-3! Your clever order of kickers secured the victory! Now, the most important question. How do you celebrate?

Hope you enjoyed being in the boots of a top coach for the day!
Source: Author jinzie 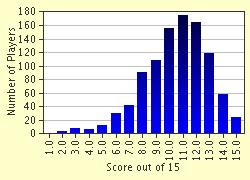 
Other Destinations
Explore Other Quizzes by jinzie