I made this quiz to help with my own understanding and study of the Laws of the Game. Please Enjoy!

The position of the keepers hands and ball are what is important, provided he handles the ball within the penalty area he has done nothing wrong even though the rest his body is outside the penalty area.

Daniel also did nothing wrong. Once the keeper comes out of the penalty area, he can be legitimately challenged just like any other player.
2. Noah is a defender for the Panthers taking a free kick just outside his penalty area. He kicks the ball back toward his keeper. Unfortunately, Noah didn't notice that his keeper was out of position and not in the goal. Realising the ball is going into the net, Noah races to the ball. Before the ball enters the goal, Noah kicks it but slices it over the goal line into his own goal. His opponents, the Raiders, begin celebrating. What action should the Referee take?


Answer: Wave off the goal, and award an indirect kick to the Raiders from the spot Noah touched the ball the second time

Law 13 - If on a free kick, after the ball is in play, the kicker touches the ball again before it has touched another player: An indirect free kick is awarded to the opposing team, the kick to be taken from the place where the 2nd touch occurred.

There can be no goal. Once the ball was touched again by Noah, play is over and an indirect kick is awarded. You wouldn't retake the kick either because free kicks can be played in any direction. Only penalty kicks and the kick-off must go forward.
3. The referee starts play with a dropped ball. Sam, playing for the Bears, kicks the ball before it touches the ground. It goes off his opponent into his own goal. His opponents the Wolves, start celebrating. What action should the referee take?


Answer: Waive off the goal and restart play from the original dropped ball spot with another dropped ball

Law 8 - On a dropped ball, play restarts when the ball touches the ground. The drop is done again if it is touched by a player before it makes contact with the ground. Also, if the ball rolls out of play before it is touched, the drop is taken again as well.
4. Walter, playing for the Bulldogs, is making a throw in near his own goal line back to his keeper. He failed to notice Dominic playing for the Falcons, who ran quickly between him and the keeper and intercepted the ball. There were no other defenders back, putting Dominic in an offside position. Dominic kicks the ball into the goal. The referee turns to see the assistant referee's flag up for an illegal throw in. What action should the referee take.


Answer: Disallow the goal and award a throw in for the Falcons

Law 15 - On an illegal throw in, the throw in is retaken by a player of the opposing team.

It is not possible to play the advantage from a throw in, only on a foul or misconduct. Had the throw in been OK, there would be no offside offence on a player receiving the ball from a throw in and the goal would have counted.
5. During a stoppage in play, the Panthers want to make a substitution. They want to take Adam off and bring on Kyle. Adam is mad. After he crosses the touch line, before the referee waives on Kyle, Adam swears at the referee for calling a bad game. What action should the referee take?


Answer: Issue Adam a red card and send him off for abusive language and not allow a substitute for Adam.

Law 3 - To replace a player by a substitute, one of the conditions is: that the substitution is completed when a substitute enters the field of play.

Even though Adam was leaving the game, he is still under the authority of the referee and can be given a red card. Since Adam is sent off with a red card, before Kyle entered play, Adam cannot be replaced and the substitution is not allowed. The Panthers must play a man short for the duration of the game.
6. A goal kick is about to be taken by the Tigers keeper. Before the ball is kicked, the referee sees Tony, a player of the opposing team punch another player of the Tigers on the field of play. What action should the referee take? Stop play, issue Tony a red card and send him off for ______________ .


Answer: violent conduct, and restart with the goal kick again

The game should be restarted with the goal kick, because the ball was not in play when the punch occurred. The red card is for a misconduct, not a foul. Fouls can only occur when the ball is in play. The ball is in not play until the goal kick is taken. Since the ball was not in play, a foul cannot occur. So the restart is not a free kick but the goal kick.
7. At the start of the match, the Spartins only have 10 players ready to play against the Ravens. What action should the referee take?


Answer: Allow play to begin with the Spartins a player short

Law 3 - A match may not start if either team consists of fewer than seven players.

A team may start the match with 10 players. The other team is not required to play short but may if they wish.
8. John takes a shot from just outside the penalty arc. The ball hits the cross bar, bursts open and plops to the ground, where it is picked up by the keeper just outside of the goal area. What action should the referee take? Play is stopped, a new ball is retreived and play is restarted with ____________ .


Answer: a drop ball on the goal area line nearest to the point where the first ball hit the cross bar

Law 2 - If the ball bursts or becomes defective during the course of a match, the match is stopped and restarted by dropping the replacement ball at the place where the first ball became defective, unless play was stopped inside the goal area, in which case the drop is on the goal area line, parallel to the goal line, at the point nearest to where the original ball was located when play was stopped.

Since the ball became defective when hitting the crossbar, which is inside the goal area, the drop takes place on the goal area line.
9. Play is stopped for Pete's second cautionable offence of the game. What action should the referee take? Show Pete a ___________________ .


Answer: yellow card, then show him a red card and send him off

The accepted procedure is to display the cards in sequence, not at the same time.
10. Bill's opponent Jack is in the center circle when a teammate of Jack's challenges Bill near the sideline. Jack yells "Kick it here!" Bill instinctively kicks the ball over to Jack. What action should the referee take?


Answer: Play should be stopped and a yellow card issued to Jack, Play is restarted with an indirect free kick for Bill's team.

Law 12 - A player is cautioned and shown the yellow card if he commits: Unsporting Behavior. Play is restarted with an Indirect Free Kick.

A player cannot verbally distract an opponent during play or at a restart.
Source: Author malackym 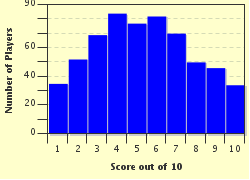 
Other Destinations
Explore Other Quizzes by malackym