This is a generally easy quiz on the basics of the game soccer, have fun!

Quiz Answer Key and Fun Facts
1. In Spain, soccer is called what?

In Spain, soccer is called futbol. To other countries in Europe, like the U.K. and Ireland, soccer is football.
2. How many players (from one team) are on the field at a time?

Ten field players, and eleven including the goalie. This can change during the course of the game, with sent off players, etc.
3. Shinguards are not required for all ages.

Shinguards are reqiured no matter the age. Also, the shinguards must be completely covered by the socks.
4. The referees on the sidelines are technically called what?

The Assistant Referees run up and down the sidelines watching for things that the match referee may not see. Their main job is to declare if the ball goes out of bounds and watch for offsides. They were previously called "linesmen".
5. An indirect kick must be touched by one other player before entering the goal?

The one other player could even be on the opposite team. On a direct kick, a second player is not required to touch the ball before scoring.
6. The goalie cannot pick the ball up outside of the ______ yard area.

The only way the goalie can pick up a ball played to them by one of their teamates is if he/she heads, knees it, or anything but kicks it back to him. In crucial situations, the goalie can go up and become an attacker o midfielder and help out the team.
7. How many blows of his whistle does the Referee give to signify the end of the game?

One whistle blow for kick off, two for the half, and three to end the game. There is nothing in the Laws of the Game that requires this. It is merely a commonly accepted convention.
8. At the professional level, a substitution can be made at any time when the game has been interrupted by the referee's signal.

At a highschool level, the substitution possibilities are limited at when they can be made.
9. Soccer is a contact sport.

You can make contact with other players as long as it's not a foul. For example, you can slide tackle, but you must hit the ball. If you hit an opponent's legs without ball contact, that will be considered as a foul.
10. What tradition is used to select ends and the team which kicks off to begin the game?

The visiting team calls it in the air. If they win the coin toss, they choose what end they want to defend, and the other team gets to start off with the ball.
Source: Author IveBeenDepped 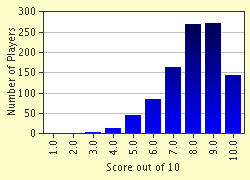 
Other Destinations
Explore Other Quizzes by IveBeenDepped