All About Soccer Trivia Quiz

Do you want to play soccer? If so, take this quiz to learn the basic rules of the game.

Quiz Answer Key and Fun Facts
1. How many players per team are on the field at one time for each team (full field)?

There are 10 outfield players and one goalkeeper. The outfield positions are fullback (defense), halfback (midfield), and striker (forward).
2. Everyone is allowed to use their hands whilst the ball is in play, but usually only the goalie uses them.

The goalie is the only player allowed to use their hands. If any outfield player intentionally uses their hands, a free kick or penalty shot is awarded to the other team. The goalie wears gloves to protect their hands.
3. How long is an official professionally sanctioned game?

Most youth soccer leagues have 60-minute games, but the official game length is 90 minutes. Some youth league games last 70 minutes.
4. How big is a regulation official soccer goal?

A goal looks much bigger than it really is. Youth leagues adjust the size of the nets according to age, with the smaller nets going to the smaller players.
5. If a ball hits a crossbar or post, it is out of play.

A ball is considered in play, even if it hits a crossbar or post. The ball has to completely cross the line for it to be out.
6. Official fields must be 80 yards by 40 yards?

It has to be rectangular, with a minimum length of 100 yards, and a minimum width of 50 yards. Most leagues play 75 yards by 110 yards.
7. A soccer game is divided into how many equal parts?

The teams switch ends at halftime to accomodate wind, sun, ground slope, etc. 4 quarters comes from basketball, 3 periods comes from hockey, and 9 innings comes from baseball.
8. How many officials are there on the field in most professional soccer games?

The referee is the boss. He calls goals, fouls, etc. The two linesmen determine whether the ball is in or out, and they call offsides.
Some games have a 4th Official who is in charge of signalling, monitoring substitutions and time added-on at the end of each half.
9. What do soccer players *not* typically wear?

Soccer players have no need for helmets because the ball doesn't hurt too much if they get hit in the head with it. The long socks are used to cover the shinguards. They match the uniform.
10. What happens when the ball goes outside of the playing field, crossing one of the two side-lines?


Answer: A throw in by one team

The team that did not touch the ball last gets to throw the ball in. They choose one player to throw it in. The ball has to be thrown with both hands from behind the head. The player has to keep both feet on the ground, but he can make a run before then. They have to throw the ball from where it went out.
Source: Author soccerstar_15 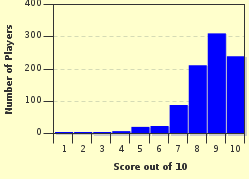 
Other Destinations
Explore Other Quizzes by soccerstar_15