If you are a big fan of 'Friends', this quiz should come very easy to you. Have fun and good luck!

Quiz Answer Key and Fun Facts
1. Which character in 'Friends' has a twin sister?

Phoebe has a twin sister, Ursula who dated Joey for a short time.
2. What is the name of Ross' pet monkey?

Ross loved that monkey, unfortunately he had to give him up, it was pretty sad.
3. Who did Ross bring back with him when he went to China?

Just when Rachel was about to reveal her feelings for Ross, out of the terminal he came with Julie the girl he met in China. Poor Rachel.
4. Which 'Friend' is a total neat freak?

Monica's obsession with neatness is what drove Phoebe to move out of the apartment.
5. What is the name of the coffee shop the gang hangs out at?

Named after Central Park. The coffee shop used to be a bar and the gang would hang out there drinking beer and playing pool.
6. Who was the first 'friend' to find out about Monica and Chandler's relationship?

Joey hated keeping it secret, but Chandler and Monica weren't ready to tell anyone. Joey finally told Rachel, who tried to get it out of the duo, but was never quite successful. She couldn't admit she knew, as she'd promised Joey she wouldn't reveal he'd told her.
7. What is the name of Ross' son?

The name was actually taken from the hospital janitor.
8. What is Joey's favorite food?

Yes Joey loves his sandwiches and jam comes in a close second.
9. How many babies was Phoebe pregnant with?

Phoebe agreed to be a surrogate mother for her brother and his girlfriend.
10. What is Chandler's last name? 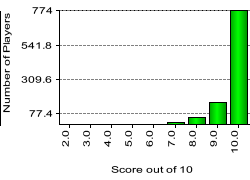 
Other Destinations
Explore Other Quizzes by JessyS