There were many ups and downs during season five, can you remember some of those twists and turns?

Quiz Answer Key and Fun Facts
1. In the episode "Dream A Little Dream Of Me," what was the name of the ball that the three females were going to?

During an ice storm three woman were on their way to the Fire and Ice ball. After being involved in an accident, they ended up at Seattle Grace Hospital.
2. In what episode did Cristina and Dr. Hunt first kiss?


Answer: "Dream A Little Dream Of Me Part 2"

Dr. Hunt comes to the rescue of Cristina after an icicle stabs her in the side. After he pulls Cristina's icicle out, he turns around and kisses her.
3. In the episode "Brave New World", who gets Meredith, Cristina, and Izzie out of the Dermatology wing?

A patient in the clinic has a rash that brings Cristina to Dermatology. When she sees that department personnel get massages, she can't believe it's the same hospital. Cristina pages Meredith and Izzie to come to Dermatology. George was looking for Meredith when he saw at they were relaxing on a couch. George told them to get to work, explaining how bored they'd become without being involved with life and death cases.
4. Who dropped a kidney in "There's No 'I' In Team?"

Twelve kidney transplants are going on in six ORs at the same time. During one surgery, a kidney drops out of Meredith's hand. Thankfully the kidney is fine and the transplant goes good.
5. Does Derek bring Lexie back to Meredith's house in the episode "In The Midnight Hour"?

After having it suggested that the interns take out one of their own appendixes, Sadie volunteered. The surgery on Sadie goes wrong and when all the interns panic, Lexie has to ask Meredith for her help. Derek brings Lexie back to Meredith's house.
6. During what episode is Izzie's birthday celebrated?


Answer: "Wish You Were Here"

Alex bakes a birthday cake for Izzie and tells her to make a wish. Izzie says she already has everything she wants.
7. Did Izzie find out that she had cancer in the episode "All by Myself"?

Izzie found out that she had cancer in "An Honest Mistake."
8. Who is the first person Izzie tells that she has cancer?

Izzie tells Cristina that she has cancer because she knew Cristina could handle the bad news.
9. Who gets hit by the bus in "Now or Never?"

Dr. Webber told George to spend his last day before joining the military with his mom. While on his way, George bravely pushed a lady who was about to be hit by a bus. He saved her life but was brutally injured. At first, his friends at the hospital didn't know it was George they were trying to save.

His identity was revealed when he wrote his nickname, 007, with his finger on Meredith's hand.
10. Which couple gets married in "What A Difference A Day Makes?"

Derek finds a tumor in Izzie's brain, but it is too small to get out. Meredith finds out and tells Alex to marry Izzie. Meredith runs back to the hospital to give Izzie her dress.
Source: Author ghosttowner 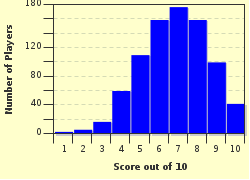 
Other Destinations
Explore Other Quizzes by ghosttowner