Some of these may be easy for a few of you, impossible for the rest. Let's see how you do!

Quiz Answer Key and Fun Facts
1. What was the obsession of the doctor who delivered Phoebe's (actually Frank and Alice's) triplets?

Remember? Phoebe says.. 'Get me another doctor! I don't want him saying I'm dialatedamundo.'
2. In the one where Rachel loses Marcel, what was the first name of the animal control officer whom Monica and Rachel went to high school with?

Monica and Rachel had no idea who she was.
3. In the one where Rachel is applying for a job at Ralph Lauren, what does she do to her future boss on her first interview that is somewhat inappropriate?


Answer: She kisses him.

4. What is the name of Monica and Ross's dead grandmother?

Weird name, huh? This was also the name of Larry Flynt's wife, played by Courtney Love in the movie, 'The People Vs. Larry Flynt'.
5. Where does Pete the millionaire take Monica on their first date?

Boy, do I wish I could find a guy like that!
6. What is in Rachel's hair when she gets back from Ross and Emily's honeymoon in Greece?


Answer: A strand of beads.

Remember when Rachel got stranded on the plane after Emily showed up at the airport? Get it? Stranded, strand? Ha Ha.
7. Where are Monica and Chandler when they first decide to get married?


Answer: Under a craps table in Las Vegas.

This is when they decide to actually get married, and then when they go to the chapel, who walks out newlyweds? Ross and Rachel!
8. In the one where Rachel is flying to London to stop Ross and Emily's wedding, where does she say she has left her passport when she is trying to buy a plane ticket?


Answer: On her nightstand.

Stupid question maybe, but it was hard, wasn't it?
9. In the one where Rachel is trying to make Ross and her father get along, what do we find out is the name of her chiropractor?

His first name is Bobby, too! Well, Robert, but that's not as funny.
10. Where is the gang about to head off to when Phoebe's water breaks by the front door to Monica and Rachel's apartment?

Phoebe was upset because since she didn't get to go to London for Ross and Emily's wedding, she's not included in the gang's memories of the trip.
Source: Author rainbowchild 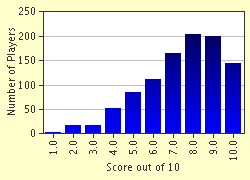 
Other Destinations
Explore Other Quizzes by rainbowchild