This quiz covers up to season 9 and will show you how well you know "Grey's Anatomy".

Quiz Answer Key and Fun Facts
1. Who was Dr. McDreamy?

In the interns called Derek Dr. McDreamy. They called Mark Dr. McSteamy! Mark was played by Eric Dane and Derek by Patrick Dempsey.
2. How many times was Derek married before he married Meredith?

Derek's first wife was Addison and his second wife was Meredith. Addison was also on "Private Practice".
3. Who did Richard turn over his job to when he stepped down as chief in season 8?

Even though Derek wanted the job Richard gave the job to Owen. Derek was previously interim chief in season 6.
4. Who treated Owen when he sliced his leg open?

Cristina Yang was the surgeon chosen to patch up Owen. She was not happy about it but she did it any way. A couple seasons later, they got married. Just think if she had never gone in that room to help him, would have they gotten married?
5. Whose kid is named Zola?

Derek Shepherd and Merideth Grey adopted Zola in season 8.
6. Who has a kid named Sofia?

Mark and Callie had a baby girl, Sofia, in season 7. Arizona, who married Callie, is also Sofia's mom.
7. How did Lexie die?

Lexie Grey and Meredith Grey were sisters. Mark Sloan and Lexie Grey were dating but were not together at the time of her death (but they both still loved each other).
8. Who did April get engaged to in season 9?

April got engaged to Matthew when Matthew proposed with a flash mob at the hospital. Not long after, Jackson Avery got hurt. April ran to Avery looking for a way out of the engagement.
9. How many kids did Meredith and Derek have at the very end of season 9?

Meredith and Derek have two kids. They adopted Zola in season 8. Meredith gave birth to their own flesh and blood at the end of season 9. They named their baby boy after Dr. Bailey because she was the one that delivered him and saved Meredith.
10. What was the name of Alex's girlfriend in season 9? 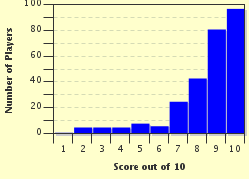 
Other Destinations
Explore Other Quizzes by jpritchett