The Griffins and co really are like Marmite...you either love them or loathe them. This is for those of us who adore the wacky family and all their friends.

His true name is Peter Löwenbräu McFinnigan as he finds out when he meets his real father Mickey McFinnigan in Ireland.
2. What is the name of the little girl Bonnie Swanson finally gives birth to in season 7?

Joe Swanson is married to Bonnie, who is eternally pregnant in the first few series. They also had an older son named Kevin, who was presumed dead for awhile.
3. Why is Peter always fighting Ernie, the giant chicken?

Ernie appears in numerous episodes, having all-out, knock-down fights with Peter all over town. He seems immortal, as no matter what Peter inflicts on him (beheadings included), he always returns.
4. When Meg goes to the mall with Jeff the nudist, why does he receive abuse from a particular teenager?


Answer: The teenager's dad is a tailor

Although Lois and Peter are uncomfortable around Jeff's parents at first, they soon accept Jeff into their lives for the sake of Meg. The two have a short-lived romance.
5. What is the name of the BBC show which prompts Stewie to run off to England?

In "Road to Europe", Stewie and a reluctant Brian travel a roundabout way to London to see this magical place. Stewie is naturally disappointed to find that it is all make-believe.
6. In season 4, what childhood ambition does Lois fulfill?


Answer: She becomes a model

In "Model Misbehavior", on a visit to her family home, Lois reveals to Meg that she was once offered a modeling contract, which her father made her decline. Lois becomes the face of Mort Goldman's pharmacy for a while.
7. Brian's tipple of choice is a martini, but in the episode "Brian the Bachelor", what drink does he guiltily enjoy?

In this episode Brian 'accidentally' auditions for "The Bachelorette". At first he is more pleased with the open bar than with the bachelorette Brooke, but he is soon smitten with her.
8. Chris Griffin has it tough, what with an evil monkey living in his closet. Not only that, he also has a lecherous old man who lusts after him. What is his name?

The man with the looooong drawl! He owned the delicatessen "Cleveland's Deli". His marriage with wife Loretta ended when she was unfaithful with Glenn Quagmire, the randy pilot and friend to Cleveland, Joe and Peter.
10. What is the first name of Lois' father?

Carter and Barbara Pewterschmidt are the wealthy, bigoted parents of Lois. They adore their daughter but are not Peter's biggest fans.
Source: Author PixieDark 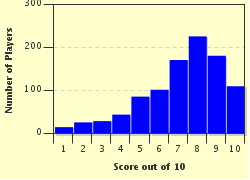 
Other Destinations
Explore Other Quizzes by PixieDark