Match the Actress with the Show - 1980s Edition Quiz

Ten actresses, ten U.S. television shows mainly from the 1980s. Match the actress with the show in which she had a leading role.

"Cheers" focused on the staff and the regulars at a Boston bar. The sitcom debuted in 1982 and nearly didn't survive its first season due to low ratings, but it ended up lasting eleven seasons until 1993. Shelley Long portrayed over-educated waitress Diane Chambers, who had an on-again off-again relationship with bar keep Sam Malone. Long left the series in 1987 after the fifth season reportedly to pursue a film career, although in interviews she claimed there were a number of reasons she left, with the main one being that she wanted to spend more time with her daughter. Long was nominated for Emmy awards for her work on "Cheers" for four consecutive years 1983-1986, and she won the award in 1983.
2. Moonlighting

"Moonlighting" only aired from 1985 to 1989, but the bickering chemistry between stars Bruce Willis and Cybill Shepherd made it one of the memorable series of the 1980s. Shepherd's Maddie Hayes owned a detective agency as a tax write-off and ended up working there with Willis' David Addison when she found herself in financial straits. According to the show's creator, it was inspired by Shakespeare's "The Taming of the Shrew" and even featured a "Taming of the Shrew" parody episode called "Atomic Shakespeare" in 1986. For her work on the show, Shepherd received an Emmy nomination in 1986 but didn't win.
3. The Cosby Show

One of the most popular series of the 1980s, "The Cosby Show" ran from 1984 to 1992 and featured the adventures of the upper middle class Huxtable family. Phylicia Rashad (credited as Phylicia Ayers-Allen in the early episodes) portrayed lawyer Clair Huxtable, the wife of Dr. Cliff Huxtable (Bill Cosby) and mother to the five Huxtable children. During its original run, the show was ranked in the top five in the U.S. for every year it was broadcast except its last year, and it was the number one ranked show from 1986-1990.

The tarnished reputation of Cosby has affected the show's legacy however, as it was removed from rerun lineups in most markets following the allegations against him. Rashad was nominated for her work on the show in 1985 and 1986 but didn't win.
4. Cagney & Lacey

Police drama "Cagney and Lacey" ran from 1982 to 1988 and featured Sharon Gless and Tyne Daly as New York City Detectives Christine Cagney and Mary Beth Lacey. The show was developed following a TV movie of the same name that featured Loretta Swit as Cagney.

When the series first aired, Cagney was portrayed by Meg Foster, who was replaced after six episodes with Gless due to network homophobic concerns that Foster was a bit too tough. Daly and Gless dominated the Emmy Award category for Outstanding Lead Actress in a Drama Series during the 1980s; they are the reason most of the other women in this quiz didn't win the award.

A prime-time soap opera, "Dynasty" debuted in 1981, inspired by the success of another prime-time soap opera, "Dallas". The show ran until 1989 and inspired a spin-off series, "The Colbys". "Dynasty" focused on the adventures of the wealthy Carrington family, headed by Blake (John Forsythe) and Krystle (Linda Evans), but the series didn't do well until Joan Collins joined the cast in the second season as Blake's ex-wife Alexis.

The rivalry between Alexis and Krystle provided a lot of the drama on the show. Both Linda Evans and Joan Collins received Emmy nominations for their work on the show in 1983 and 1984, respectively, but didn't win.
6. Hill Street Blues

Credited as one of the best police dramas of all time by "TV Guide", "Hill Street Blues" ran from 1981 to 1987. A 2014 "CNN" article declared it to be the "most influential TV show ever" because of its use of an ensemble cast with interwoven plot lines that extended over multiple episodes - something that is common place now but was unusual when it debuted. Veronica Hamel portrayed public defender/Assistant District Attorney Joyce Davenport who was in a relationship with Captain Furillo (Daniel J. Travanti) of the Hill Street precinct station. For her work on the show, Hamel was nominated for Emmy awards for five straight years in 1981-1985 but didn't pick up the award.
7. L.A. Law

"Kate & Allie" was a sitcom that ran from 1984 to 1989 and starred Susan St. James and Jane Curtin as the title characters. Kate and Allie were childhood friends who decided to share a home and raise their families together following their divorces. Reportedly, the network required the series' producers to show Kate and Allie having separate bedrooms so that it would be clear that the characters weren't lesbians. Both actresses received Emmy nominations for their roles in 1984 and 1985, but it was Jane Curtin who won the award both those years.

She also received an additional nomination in 1987 for her role on the show.
9. The Golden Girls

Another series about friends living together, "The Golden Girls" debuted in 1985 and ran until 1992 and featured four senior citizens sharing a home in Miami. Bea Arthur, Rue McClanahan, Betty White and Estelle Getty portrayed Dorothy, Blanche, Rose and Sophia on the sitcom, with Sophia being Dorothy's mother, even though Estelle Getty was actually younger than Bea Arthur. Arthur, McClanahan and White all received Emmy nominations for Best Actress in 1986-1989, with White continuing to receive nominations in 1990-1992. White won the award in 1986, McClanahan won it in 1987 and Arthur won in 1988. Getty wasn't left out - she picked up nominations for Best Supporting Actress in 1986-1992 and won the award in 1988.

While I could have picked any of the actresses for this quiz, I went with White because she had the most nominations for lead actress of the group.
10. Designing Women

The sitcom "Designing Women" ran from 1986 to 1993 and followed the adventures of four women who ran an interior design firm in Atlanta. The original cast featured Dixie Carter, Delta Burke, Annie Potts and Jean Smart, although new cast members were added when Burke and Smart left later in the series. Carter and Burke played sisters Julia and Suzanne Sugarbaker, whose different personalities brought about much of the comedy in the show. Delta Burke received an Emmy nomination for her work on the show in 1990 and 1991 but didn't win.
Source: Author PDAZ 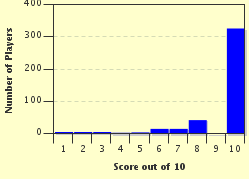 Here are some "very easy" generic quizzes for some fast points!