Hey! This quiz has a little bit of everything. If you're a fan, and you watch the show carefully, you should have no problem with it. There are questions about roles, episodes, seasons and minor characters. Good luck!

Quiz Answer Key and Fun Facts
1. This actress has portrayed Alexandra Grey on 'Grey's Anatomy', starting in season 3. Who is she?

Chyler Leigh portrays Lexie Grey. She was firstly an intern, and later moved on to be a resident, one year behind April, Cristina, Meredith, Jackson and Alex, She is also Meredith's half-sister. Lexie passed away on the season 8 finale after she suffered severe injuries from a plane crash. Katherine Heigl portrayed Izzie Stevens during the show's first five seasons (and a few episodes of the sixth one), Ellen Pompeo portrays Meredith Grey and Sara Ramirez portrays Callie Torres.
2. This actress portrays a character in 'Grey's Anatomy' who was selected to be chief resident by Dr. Owen Hunt on the season 7 finale. Who is she?

Sarah Drew stars as Dr. April Kepner in 'Grey's Anatomy'. April was fired by Chief Webber in "I Saw What I Saw", but was later rehired by Derek Shepherd. She was also refired by Owen after failing her boards, but he hired her back yet again. April started a relationship with Jackson later in the show.
3. Which actress played the role of Hannah, a paramedic that appeared in the season 2 episode "As We Know It"?

Meredth and Hannah had their hands stuck in a patient's body, as a bomb was inside him. Hannah suddenly fled, scared, leaving Meredith alone with her hand stuck on the bomb. Christina Ricci was nominated to an Emmy for this small part.
4. Who does Kim Raver portray?

Teddy was brought to Seattle Grace by Owen Hunt, who worked with her back in the army. Before she arrived, everyone thought she was a man. In the season 8 finale, Teddy was fired by Owen so that she could follow her dreams, instead of staying in the hospital for him.
5. Alex Karev has a brother and a sister. What are their names respectively?

Aaron almost killed Amber once, due to his mental illness.
6. On the dramatic two-part season 6 finale, a shooter named Gary Clark killed both Reed Adamson, and Charles Percy, among others. He did this because his wife died at the hands of Derek and Chief Webber, and because Lexie unplugged her from life-support. What was his wife's name?

Alison was declared brain dead, but Gary never got closure, and thought that the doctors that were on her case (Derek, Richard and Lexie) killed her. He then killed several people within the hospital.
7. During the shooting at the hospital, Gary entered a room where Callie and Arizona were treating a little kid. What were they doing?

When Callie told Clark that there were only kids there, he left, and Arizona started crying.
8. The full name of Derek's ex-wife, and the actress playing her role, are what?

Kate Walsh then left 'GA' and starred on her own spin-off show, 'Private Practice'. 'Grey's Anatomy' characters often cameo in this show as well.
9. Who portrays Dr. Jackson Avery?

George died after saving a woman's life by pushing her off the street, as an incoming bus was about to strike her. The bus hit him, and he passed away from the injuries. Izzie was diagnosed with skin cancer, and made it through after a lot of treatment.

However, she was fired soon after her recovery and she left the hospital, and her husband, Alex. Erica left the show in season 5. Lindsay was never a main character.
Source: Author InoSakura123 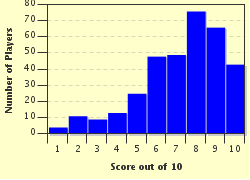 
Other Destinations
Explore Other Quizzes by InoSakura123