The Best "Friends" Quiz Yet

Here's a few questions concerning our "Friends" from over the years.

Quiz Answer Key and Fun Facts
1. How many cushions are there on the coffee house sofa?

Many things have changed in the coffee house over the years, but the couch has stayed the same. The couch must be very comfortable by now.
2. Who directed the first episode of "Friends"?

We found out that poor Joey has freakishly small feet. I guess the old saying isn't true because Joey sure gets the ladies. They were said to be a size 7.
4. What is the name of the one-legged girl who dates Chandler and Joey?

Joey threw her leg into the fire thinking it was a log. Then, she dates Chandler and dumps him because of his third nipple. Janice just dated Chandler and Ross. Cheryl was Ross's messy paleontologist. Kathy dated both Joey and Chandler, but has both her legs.
5. When Ross fell asleep on a train to Poughkeepsie, what city did he wake up in?

He ends the relationship with the girl from Poughkeepsie, falls asleep on the train, and meets another girl in Montreal.
6. Eddie had a pet fish, what was its name?

After Eddie's fish died he replaced it with a goldfish cracker.
7. What was the name of the maid Monica and Chandler hired?

Monica thinks Brenda stole her jeans with the ink stain on them, and gets caught with her head between Brenda's legs while looking for the stain.
8. How much money did Monica invest and lose in the stock market?

It all started because Monica saw a stock with her initials M.E.G.
9. Which friend speaks first in the pilot episode?

Monica says, "There's nothing to tell. It's just some guy I work with."
10. What was Rachel's hairless cat's name?

She decided to buy this cat because her Grandma had one and it was the sweetest cat. This one turns out to be very mean and scratches her. She ends up selling it to Gunther for one thousand five hundred dollars, making a five hundred dollar profit.
11. Joey claims he weighed how much when he was born?

Joey's grandma calls him her "big fat Joey star", he says it's because he weighed around 27lbs at birth.
12. What dinosaur did Ross impersonate in his class?

His student asked him to imitate the high pitched noise a Velociraptor makes, and of course Ross does it.
13. What way do the doors at Central Perk open?

We have seen these doors open hundreds of times, but if you knew which way they opened that means you really pay attention. It's kind of odd that they open in. Most businesses have the doors open out because it's actually a fire hazard to have them open in.
14. Emily was involved with another guy besides Ross. What was his name?

After Ross told Emily that he loved her, she told Ross that she was seeing Colin too.
15. How many kinds of potatoes did Monica make at the friends' first Thanksgiving?

She made tots, mashed with peas and onions, and mashed with lumps. They all got ruined because everyone went up to the roof to see the giant Underdog balloon that got loose at the Thanksgiving Parade, and no one grabbed the keys to get back in.
Source: Author vuittonexpert 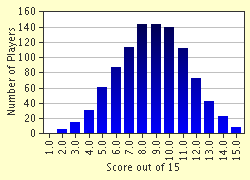 
Other Destinations
Explore Other Quizzes by vuittonexpert