"Donkey Kong Country" is for the SNES. This quiz will cover all aspects of the game, from good guys and bad guys, to 'what's that monster's name?' Are you ready?

Quiz Answer Key and Fun Facts
1. How many extra life balloons can you find on Level One?

The six balloons aren't so easy to get. The first three are hidden in the trees above the level, and you need quick jumping abilities to get them all before they float away.

The fourth balloon is in the mini bonus level that Rambi needs to bash into. The last two aren't so easy to get, however.

At the very end of the level, (providing you have survived long enough with Rambi) jump off the last tree, right over the exit, and jump off Rambi at its peak. There you will find an off screen tire, leading you to two blue balloons, totaling another six lives!

All these balloons in total gives you an amazing 12 lives! In only one level!
2. What is the name of the boss of World 1?

Really Gnawty and Dumb Drum are both bosses that you'll find later in the game, and Extremely Gnawty doesn't exist. I made him up. Very Gnawty is quite easy to beat. You just have to time your jumps to make sure he doesn't squish you!
3. What is the name of the Monkey that owns the Plane Rental Service?

Funky Kong's flights are very useful. They can take you to any level in the entire game, free of charge! All you have to do is hop into a barrel plane, and you're off! You can go wherever you want, even to another airport.
4. The "Donkey Kong Country" series was created by a company called "Rare". Which of these games did "Rare" also create?

"Donkey Kong Country" was started in 1993, but production didn't finish until February 1994. This was when is first came out in Japan, followed by the USA four months later, and Western Europe at the end of the year.
6. What is the red and black striped snake called?

Personally, I think Wiggles would be a much better name, but the people at "Rare", decided to go with Slippa. They're quite possibly the easiest enemies in the game to beat. all you need to do is jump on them, or throw a barrel at them. If you jump on one, there's normally a trail of about three or four following, so you'll end up jumping on all of them at once (providing you time it right)!
7. Which of these enemies is NOT a boss monster?

There is a big boss Zinger at the end of world 3. Dumb Drum is the world 5 boss. Very Gnawty is the world 1 boss. Kleever is a boss on "Donkey Kong Country 2"
8. Who here isn't a member of the Kong family?

Manky may have the last name Kong, but that doesn't make him a family member! He's a bad guy who throws barrels at you. Shame on him!
9. Which of these is one of your animal buddies in this game?

Rambi's big horn is very useful against enemies. If you time his jumps right, he can break down walls as well. All the others are on "Donkey Kong Country 2". Squitter is an Animal Buddy, and Squidge and Klubba are both enemies.
10. What is the name of the final bad guy in "Donkey Kong Country"?

King K. Rool isn't particularly difficult to beat, providing you know what's going to happen next. His basic form of attack is:
1. Run/jump to one side of the screen
2. Throw his crown at you
3. Jump to the opposite side of the screen
4. Drop a 'gauntlet' of cannon balls across the screen.

This varies depending on how far you get. He may get faster, or do the same thing more than once. For example, the 'gauntlet' of cannon balls will increase in number until it eventually sweeps the screen three times. As long as you are aware of these changes, and your timing is immaculate, you should have no problem defeating King K. Rool, and retrieving your banana hoard! Huzzah!
Source: Author KiwiDean 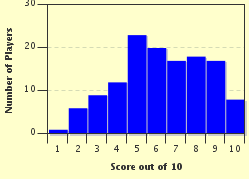 
Other Destinations
Explore Other Quizzes by KiwiDean