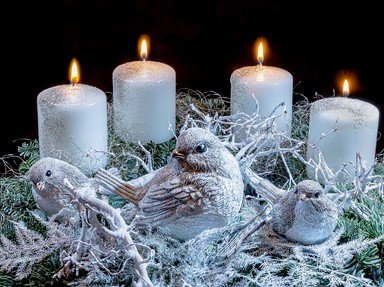 Christmas paraphernalia but oh how we love it. Hope that this trivia quiz will put you in the Christmas spirit.

Quiz Answer Key and Fun Facts
1. What is the German version of "O Christmas Tree"?

The Christmas tree plays a big part in this celebration for most people and in the past, the evergreen tree was decorated as a symbol of prosperity and ever-lasting life. The early German settlers it is said, introduced their Tannenbaum (or Christmas tree) to America.
2. Which of the following is not a Christmas decoration?

Holly, tinsel and mistletoe are all used to enhance the ambiance at this festive season. The lily is a spring flower.
3. The decoration placed on top of a Christmas tree is usually a star or an angel.

In days of yore, a star was usually placed on top of the tree as a symbol of hope and good luck. An angel was placed to bless and protect the home. For most people today, they are placed for decorative purposes only.
4. Which of the below mentioned names is not another name for "Father Christmas?"

Scrooge was a character from one of Charles Dickens books.
He was a miser and hated Christmas, calling it a "humbug!"
One Christmas Eve night he had a nightmare, which depicted his selfish life and on awakening, he vowed to share his wealth with the poor and to celebrate Christmas.
5. In England, children receive gifts from Father Christmas at this yule tide season. From whom do children living in America receive their gifts?

The American children receive their gifts from Santa Claus. He is the same jolly, bearded man that is known through out the world, for bearing gifts at this time of year.
6. Which of these is not usually sung as a Christmas song?

"Star of Hope" is a hymn about Jesus but it speaks of His second coming to earth and not of His birth, therefore it is not considered a Christmas song.
7. Which of the greetings below says "Merry Christmas" in Spanish?

Merry Christmas, from Barbados!
8. Two of the three wise men who visited baby Jesus were traditionally known as Melchior and Caspar. What was the name of the third wise man?

The three wise men were said to be kings and were traditionally named Melchior, who came from Persia (Iran) Caspar, from Mesopotamia (Iraq) and Balthazar, from Ethiopia. (Information was found in a book called "The Book of Kings" and from the epic, "King of Kings.")
9. During the Christmas season special songs are sung. What is the name of these songs collectively?

These songs are called Carols and many people refer to them as being joyful. The meaning of the word Carol is "A joyous song."
10. St Nicholas - or St Nick as he was at times called - was a person and not a fictitious character.

It is said that St Nicholas was a man who helped the poor and needy, especially at this celebration. One Christmas Eve night, he threw a bag of gold down the chimney of a poor man's house and it fell into a stocking that was hung up to dry. Ever since then, many people started hanging up socks at Christmas in the hope of receiving a gift.
11. Everybody on earth celebrates Christmas on the 25th of December.

People disagree about the exact date of Jesus' birth and not every one celebrates His birthday on December 25. However, many people share the same sentiment of goodwill for all mankind and remember that: "Jesus is the reason for the season."

Happy birthday Jesus!
12. In England (as well as in many other countries), if you were caught standing under the mistletoe, what would be expected of you?


Answer: You would have to kiss someone

The mistletoe is a plant with small white berries and is traditionally placed in a doorway as part of the decorations.
If you were caught standing under it, you would be expected to kiss someone.
As the song goes: "I saw mommy kissing Santa Claus underneath the mistletoe last night..."
13. Which of the below mentioned is not a name of Santa's reindeer in the famous Johnny Marks' song and how many of them did Santa have?

Frosty was a snowman it is said, who came alive and danced around with the children one Christmas Day.
According to the song "Rudolph the Red Nose Reindeer," they were nine reindeer and Rudolph was the most famous of them all.
14. In the famous song, how many days of Christmas are there, and what gift was given to the true love on the second day?

According to the song entitled "The Twelve Days Of Christmas," this person's true love gave them a gift on each day of the twelve of Christmas and they were all quite amusing gifts. On the second day, the lover was given two turtle doves.
15. "We wish you a Merry Christmas and A Happy - -."

These are the words of one of the most well known Christmas carols, wishing every one merriment at Christmas and happiness in the new year. 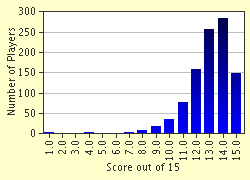 
Other Destinations
Explore Other Quizzes by jesusyes