Do You Know Hindi? Trivia Quiz

Here's a quiz on the Hindi language. Enjoy!

Quiz Answer Key and Fun Facts
1. You're walking down the streets and bump into someone, how would you say "forgive me" or "I'm sorry"?

"Jaldi mein hoon" means "I'm in a hurry."
"Kya Dekh rahe ho" means "what are you looking at."
"namaste" is "hello"
2. You are introducing your parents to your friends, how would you say Mother in Hindi?

The country, India, is also called "Darti Maa", which means Mother land. Bhen means sister. Bheti means daughter. Bhai means brother. The funny thing is that in hindi, you would call your mother's brother your "Mama", whereas in English, "Mama" is what you might call your mother.
3. You're eating a carrot dessert. What's it called?

There are many desserts in India. Different desserts belong to different regions of the country. Gajar ka halwa, as you probably know now, is a sweet made from carrots, and is rather tasty! It's made from deep-fried, batter soaked in syrup. Then it's shaped into a large, pretzel-like shape. Jalebis are orange most of the time, but can also be found in white.

It sort of has a chewy texture and a sugary crunch. Barfi is a sweet made from condensed milk and then it is cooked with sugar until it becomes solid.

There are many different varieties of barfi. There are besan barfi and pista barfi. Kheer is a rice pudding that is made by boiling rice, milk, and sugar together. It's usually flavored with cardamom and pistachios.
4. Someone calls you "Yaar". What does it mean?

Many young people refer to each other as a "yaar". It's very common in India. Uncle would be either "Chacha" or "Mama", depending on what side of the family he's on. Mother would be "Maa". Sister would be "Bhen".
5. You are asking your friend how many apples he took from the bowl. You would say, "Tumne katora se kitne seb liye?"

There are many other ways to say this statement or question. If you were to ask someone who's older than you, you would say, "aap ne kitne seb liya hai?".
6. If you were talking to an elder, what subject pronoun would you use?

There are two ways to say "you". "Aap" which is for respect, and "tum", which is sort of informal.
7. Hindi has its origin in which language?

Sanskrit is sort of the mother language of most the languages in India.
8. How would you say the number 20 in Hindi?

"Mujhe phool bahut pasand hai" means "I like flowers a lot"
10. How would you say Hello in Hindi?

Sasriakal is hello in Punjabi. Salaam is hello in Urdu. Kya means what.
Source: Author nemo2009 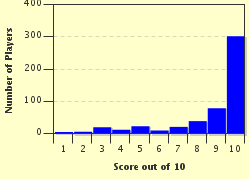 
Other Destinations
Explore Other Quizzes by nemo2009