Where did these Hindi words come from? Quiz

This quiz is about Hindi words of foreign origin. You have to tell the language they originally came from. I hope you like it.

Share on Facebook
Share on Twitter
Share by E-Mail
Author
puitpankaj
Time
5 mins
Type
Multiple Choice
Quiz #
306,823
Updated
Dec 03 21
# Qns
10
Difficulty
Tough
Avg Score
6 / 10
Plays
596
This quiz has 2 formats: you can play it as a or as shown below.
Scroll down to the bottom for the answer key.

Quiz Answer Key and Fun Facts
1. The Hindi word for "towel" is "tauliya". It comes from a language which is spoken in South America. Name the language.

The word for "cannon" is "top" in both Turkish and Hindi.
Arabic and Persian were also spoken in the Ottoman Empire.
3. The Hindi word for tea comes from the language widely spoken in one of India's northern neighbors. Name the language.

The Hindi word for tea is "chai".
China shares a land border with northern and northeastern parts of India.
4. The common Hindi term for lawyer comes from the language that is the largest member of the Semitic family in terms of speakers. Name the language.

The commonly used Hindi word for lawyer is "wakeel". Other words conveying the same meaning are "nyayaz" and "vidhivakta".
Arabic is mainly spoken in the Middle East and North Africa.
5. The Hindi word for "shop" comes from the language that is also called "farsi" in many places. Name the language.

"Kartoos" comes from the French word "cartouche".
The territory referred to as Gaul includes present-day France and Belgium.
7. As a result of British colonial rule over most of India spanning two centuries, there are many English words in Hindi vocabulary now. Which of the following words comes from English?

The other three options are English words, but of Hindi origin.
"Sentry" comes from "santri", meaning an armed guard.
"Shampoo" comes from "champi", a form of Indian scalp message.
"Cot" comes from "khat", a type of bed or couch made of strong ropes.
8. Which of the following Hindi words comes from Portuguese?

"Inglese" is the word for "English" in Italian, "Inglés" is the word in Spanish, and "Engels" comes from Dutch.
10. From which language has the word "swarna", for gold, come from?

"Swarna" is a Sanskrit word. Its equivalent in modern Hindi is "sona".
Although Sanskrit is now hardly spoken, it is still a major source of borrowed vocabulary for Hindi.
Source: Author puitpankaj

This quiz was reviewed by FunTrivia editor Bruyere before going online.
Any errors found in FunTrivia content are routinely corrected through our feedback system.
Most Recent Scores
Jan 07 2023 : Guest 45: 5/10
Dec 02 2022 : Guest 49: 0/10 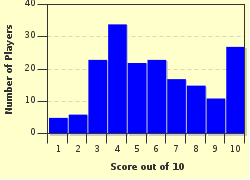 
Other Destinations
Explore Other Quizzes by puitpankaj