Jesuit Colleges and Universities in the U.S. Quiz

Ignatius Loyola, soldier, knight, priest and saint was the founder of the Society of Jesus, better known as the Jesuits. Called Father General by his followers, he sent his companions to Europe and beyond to educate and create centers for learning.

Georgetown was founded in 1789 and is located in Washington D.C. with an enrollment of about 14,000. Their athletic teams are the Hoyas and they have a good basketball program.
2. One of the Jesuit universities in the U.S. is named after a famous Jesuit explorer who was the first non-native, with his fellow companion and explorer, Louis Joliet, to map the Mississippi River.

Father Jacques Marquette was a French Jesuit missionary to the native Americans and explored parts of the Midwest. Marquette University is in Milwaukee, Wisconsin close to the shore of Lake Michigan. Marquette's athletic teams are the Golden Eagles and they have a better than average basketball program. Marquette was founded in 1881 and has an enrollment of about 14,000.
3. A small college on the west coast with land purchased by Father Joseph Cataldo, S.J. for a mere $936.00, had its first enrollment of 18 young men. This university is now well known for its almost yearly appearance in March Madness. Which Jesuit university of about 7,000 students is it?

This school is named for another Jesuit, Father Aloysius Gonzaga who died at 23 years old from pestilence and famine in Italy. Even though he was frail, he spent his days caring for the sick. Gonzaga University's sports teams are the Bulldogs or the Zags, and are known for their excellent basketball program.
4. In 1825, Father Benedict Fenwick, S.J. envisioned a college in the city to educate future leaders. Not until 1863 was the charter approved by the state. Which city college was this?

Now of course, Boston College is a university with one of the largest community of Jesuits in the world. The main campus is located in Chestnut Hill, Massachusetts with beautiful Gothic architecture. They are nationally known for football and their team nickname is the Eagles. The school has an enrollment of over 14,000 students.
5. Not only is this college the oldest college west of the Mississippi River, it is the second oldest Jesuit university in the nation. Which college, in the heart of a Midwestern city, is it?

Founded in 1818 with a present enrollment of over 12,000 students representing all 50 states, St. Louis University is known for its Law School and School of Medicine. Its athletic teams are the Billikins.
6. This Jesuit college was founded in 1886 and was called St. Ignatius College, strictly a college for men. It was renamed in 1923 after the first Catholic archbishop in the U.S. What is this college called today?

John Carroll was also the founder of Georgetown University. The university is located in University Heights, Ohio, a suburb of Cleveland. In 1968 it became fully coeducational. They are known for their strong liberal arts program as well as the Bolero School of Business. The enrollment is about 4,000 and their athletic teams are the Blue Streaks.
7. With a nationally ranked MBA program, this small school in Ohio was the fourth Jesuit college in the U.S. and was established in 1831. Which school is it?

With an enrollment of about 6,500, Xavier is another Jesuit university known for its basketball team, the Musketeers. It is located in Cincinnati. It was the first Catholic university in the Northwest Territory. (That is what Ohio was part of in those days.)
8. One block from Independence Hall in Philadelphia, founded by Father Felix Barbelin, S.J., 30 young men came together in a courtyard of a church in order to learn. From these humble beginnings we now have which university?

After outgrowing their tiny quarters in a courtyard of St. Joseph's Church, this university now has an enrollment of about 7,500 students. Their athletic teams are the Hawks. This prestigious university has a faculty where 98% of the professors hold the highest possible degrees in their fields.
9. The oldest institution of higher learning in the Western U.S. was founded in 1851 and is now referred to as the "Jesuit University in Silicon Valley". Which university is this?

The first Bachelors degree in California was earned from Santa Clara College.
10. This is the largest Jesuit Catholic university in the United States. When it was founded in 1870, it was called St. Ignatius College after the founder of the Jesuits. Which school is it that has four campuses, one of them in Rome?

Loyola University Chicago, with two of its campuses on the shores of Lake Michigan, one on the "Magnificent Mile" near the historic Water Tower and the other, the North Shore campus in Rogers Park, the northernmost part of the city. The third campus is the Loyola Medical Center in Maywood which has one of the leading academic medical schools in the country.

In 1962, Loyola opened a Liberal Arts Center in Rome, Italy. Loyola won the 1963 national basketball championship and its athletic teams are the Ramblers.
Source: Author oldstuff28 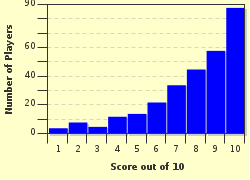 Related Quizzes
1. Where's The College Located? Average
2. Where Is This University? Average
3. Where in the U.S. Are These Colleges? Average
4. Where Are These Schools? Average
5. Ivy league Plus Two Locations Very Easy
6. What's the Right US University for Me? Easier
7. I Need Some Friends Easier
8. "O" for University Average
9. University of Texas Pride and Craziness! Average
10. The Ivy League Difficult
11. Colleges/Teams of the South Eastern Conference Easier
12. Go, State! But Where? Average


Other Destinations
Explore Other Quizzes by oldstuff28