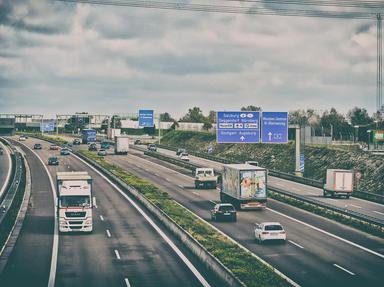 Key to My Truck Trivia Quiz

I am a big man and I can not see myself driving anything other than a pick-up or SUV. I have ten keys belonging to ten different trucks. Let's see if you can correctly identify these road warriors.

Quiz Answer Key and Fun Facts
1. The first key belongs to a truck manufactured by Toyota. This particular model shares its name with a location within the American state of Washington. Which is it?

The Toyota Tacoma was first introduced in 1995 as a compact pick-up. In 2005, the model was upgraded into a mid-size pick-up and won Truck of The Year award from "Motor Trend". Toyota offers an off-road version of the Tacoma dubbed the TRD. The full size Tundra pick-up is also a vehicle manufactured by Toyota.
2. The second vehicle comes from a line of pick-ups with a lot of "guts and glory". These trucks were split into a brand of their own in 2010. Which of these is it?

The LM002 was an SUV manufactured by Lamborghini from 1986-1993. It was built with the same V12 engine used for the Lamborghini Countach model. The LM002 cost roughly $120,000 in the eighties. That price would be more than double that today. Only a little more than three hundred LM002's were ever built.
4. The fourth key belongs to a pick-up manufactured between 1981 and 1986. This truck was a modified version of the Jeep CJ-7. What was the name of it?

The Jeep utility vehicle was first introduced during World War II. After the war, Willys-Overland Motors began to issue the CJ (Civilian Jeep). In 1976, the Jeep CJ-7 was introduced and in 1981 a longer pick-up styled version was offered as the CJ-8 Scrambler. The CJ-7 and CJ-8 were discontinued after 1986 and the CJ-7 was redesigned as the Jeep Wrangler.
5. The fifth key belongs to a real beast of a truck. It is a souped-up version of the Ford F-150 released from 2009-2014. What is this beast called?

The Ford SVT Raptor was a more stylish and more powerful version of the Ford F-150. It was first introduced in 2009 and was powered by a 6.2L V8 engine. The Raptor came equipped with all-terrain tires. In 2014, the Raptor was discontinued, however a new version of the Raptor was released in 2017.
6. For my sixth vehicle, how fitting that it should be a 6x6 instead of a simple 4x4. Which Mercedes-Benz class of vehicle was offered as a 6x6?

Mercedes-Benz first introduced the G-Class SUV in 1979. Nicknamed the G-Wagen, it wasn't available in the United States until 2002. In 2013, Mercedes began producing the G63, a large six-wheeled, all wheel drive variant of the G-Class. The truck cost more than $600,000 and the 6x6 version was discontinued in 2015.
7. The key to my seventh truck belongs to a GMC Sierra. It is no ordinary Sierra, but a more luxurious version named after a mountain. Which of these is correct?

Denali, also known as Mount McKinley, is located in Alaska and is the tallest mountain in North America. General Motors places this name on the top-of-the-line versions of trucks belonging to their GMC brand. GMC vehicles with the Denali branding (Sierra, Yukon, Envoy, etc.) can be nearly fifty percent more expensive than the standard models.
8. Key number eight belongs to an Extreme Truck. No kidding, it's actually branded as the Extreme Truck (XT for short). Which truck manufacturer sold the XT from 2004-2008?

International Trucks is known for manufacturing commercial vehicles such as tractor trailers, buses and other work vehicles. In 2004, International released the XT (Extreme Truck) series for private use. At over seven feet tall, they were one of the tallest pick-up models ever sold. The International XT was discontinued in 2008.
9. The ninth key belongs to an SUV that gained some star power in 1993 after appearing in the blockbuster film "Jurassic Park". Which vehicle am I speaking of?

The Ford Explorer SUV was introduced in 1990 and was featured in the 1993 movie "Jurassic Park". In the movie, Ford Explorers were used as unmanned electric vehicles designed to take tourists around the park. Two of the trucks end up getting trashed by the T-Rex. In 2001, Ford released a pick-up variant of the Explorer known as the Sport Trac.
10. The final key opens a pick-up truck sold by Chevrolet. It is a vehicle that shares its name with a river located in the United States. Which of these is it?

The Colorado River runs through the states of Colorado, Arizona, Nevada and California. Years of erosion from the Colorado River carved out what is now the Grand Canyon. The Chevrolet Colorado is a mid-size pick-up released by General Motors in 2004. A similar pick-up known as the Canyon was sold under General Motors' GMC brand.
Source: Author RedHook13