I will simply give you a name of an animal in English and you will give me the response in Serbian, or I may test you by switching it around. Good luck!

Share on Facebook
Share on Twitter
Share by E-Mail
Author
trivialsnake15
Time
3 mins
Type
Multiple Choice
Quiz #
308,355
Updated
Dec 03 21
# Qns
10
Difficulty
Average
Avg Score
8 / 10
Plays
280
This quiz has 2 formats: you can play it as a or as shown below.
Scroll down to the bottom for the answer key.

Quiz Answer Key and Fun Facts
1. This animal keeps to itself and is not so invasive due to dense forests and ample food supply. In Serbian how would you say "Bear"?

"Bubasvaba", or cockroaches, are pests that inhabit many homes in Serbia. They scurry about when it is dark and feed on food scraps, dead skin, and book bindings. They are very hard to get rid of, and breed very quickly.
"Kornjaca" is a turtle. Honestly I never saw one in my time spent living in Europe. I know they exist in ponds and rivers in Serbia; however, they are quite rare.
"Muva" is a fly. Another pest that inhabits Europe, the common house flies are annoying and filthy. There are larger flies that are dangerous to humans and animals. We call it "Obad" which is a horse fly. They bite chunks out and come back for more. Did I forget to mention, they can smell blood from a mile away!
2. The butterfly is an insect that can be seen in most gardens in eastern parts of Europe. How would you say this in Serbian?

"Licica" is Serbian for fox. Foxes are common in wooded parts of Serbia; however, they avoid civilized areas so they are rare to see. They also camoflage very well with shrubbed areas and tall grasses.
"Kokoska", or hens, are important animals in Serbia. People rely on them for their fresh eggs. When we cook the meat and make chicken we refer to the meat as "Pile".
"Visnja" is Serbian for sour cherry. Most people prefer the juice to the actual fruit itself. It is also very good in jam with "palacinke", which is very similar to crepes. It makes for a wonderful dessert!
3. The veverica is a cute and cuddly, yet timid and quick, animal, found throughout Serbia. What is its English name?

Fish are "riba" in Serbian. They are a major food source in Serbia and are usually sold fresh at most markets.
Cow is "krava", and is used for milk, cream, cheese and of course meat.
Deer are "jelen", and are hunted in mountainous areas like Crna Gora for their leaner tasting meat. Very rare in sightings around civilized towns and cities.
4. Turtles are very rare to spot in Serbia; however, it is fun to tease people by calling them a turtle. How would you say "turtle" in Serbian?

Budala is a fool; something you might call someone who kicks sand all over your picnic.
Jez is a hedgehog: they usually come out at night. They have poor eyesight, but excellent defense. When threatened they roll up into a spikey ball until they feel safe enough to carry on.
Konj is a horse: they are very helpful around the farm for transportation and hauling.
5. The direct translation of the Serbian "Nilski Konj" is "Water Horse". What would we call actually call this creature in English?

Seaweed (Alge in Serbian)is used as a food source for its high iron, but also used in spas for facials.
Sea urchin (Morski jez) translates literally to sea hedgehog. They cover a lot of rocky beaches in shallow waters. Be very careful when wading in the water because it really hurts when you step on them, and the spines break off slowly releasing toxins.
Starfish (Morska zvezda) are found on rocky beaches usually attached to the underside of rocks or rocky caverns at low tide. They digest their food outside their bodies!
6. The word for "bird" is quite difficult to pronounce in Serbian. Which of the answers below is the correct Serbian word?

I won't give away what "Macka" is, because it is the answer to another question.
Pas is Serbian for dog. More people consider dogs as pets than cats, but they also run rampant through the streets. They cause quite a ruckus during mating season.
Jez is a hedgehog.
7. "Macke" run wild and rampant in Serbia, and will beg at your dinner table if you eat outside. What is this animal in English?

Cats in Serbia are often regarded as a nuisance. They will beg by meowing and howling, and it is honestly quite annoying. Many people consider them as pests opposed to pets.

Mouse or "mis" are timid creatures and not often seen - especially with all the cats running around.
8. Most snakes found in Serbia are poisonous. There are two kinds of adders, and a breed of sand viper. How would you say "snake" in Serbian?

Svinja is a pig. It is a very popular meat in Serbia, except among Muslims who don't eat pork (svinjetina) because of their religion. It makes a very tasty meal when cooked on a spit (slow rotisserie).
9. How would you say "Elephant" in Serbian?

Jabuka is an apple, a common fruit grown in orchards throughout Serbia.
Ajkola is a shark, which is very common in the warmer waters of the Adriatic. However these are mostly small sharks like the blue shark and grey shark and they prefer to keep to themselves, eating small fish rather than Serbians.
Zemlja is the Serbian word for a "country", such as Serbia, Montenegro, or Croatia.
10. The creatures known as "Meduze" in Serbian live in the water. True or false?

Meduze are jellyfish. They inhabit waters that get a lot of sunlight, because one of their methods of feeding is photosynthesis.
Source: Author trivialsnake15

This quiz was reviewed by FunTrivia editor stedman before going online.
Any errors found in FunTrivia content are routinely corrected through our feedback system.
Most Recent Scores
Feb 02 2023 : Guest 84: 10/10
Jan 28 2023 : Guest 211: 9/10 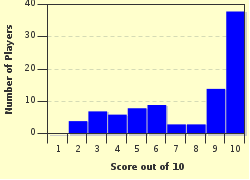 
Other Destinations
Explore Other Quizzes by trivialsnake15