This quiz is about the Sindhi Language, which originates from a town called Sindh located in Pakistan. I will ask in Sindhi and you choose the English meaning.

Quiz Answer Key and Fun Facts
1. What is the meaning of 'Khande'?

Generally Sindhis have a very very sweet set of TEETH.
2. What is the equivalent in English for 'Kaaro Mirch'?

Black Pepper is used quite often in Indian cuisine unlike white pepper that
is used in Chinese cuisine. So when ever the black pepper is not available then the next closest thing would be white pepper,
but believe me you can taste the difference.
3. 'Magaz' means what in English?

One of the delicacies of the Sindhi's non-veg cuisine is goat's brain deep fried using powdered lentils as batter. The savoury snack dish is called 'Magaz Jaa Pakora'.
4. What is the meaning of 'Hiteh Ache'?

'Ache' means come and 'Hiteh' means here. It is perfectly okay to
use either word first, it will still mean the same thing in Sindhi.
5. 'Vaanyu' or 'Vaanyu Hali' is also known as what in English?

Again here there is the flexibility to change the words around in Sindhi context to mean the same thing.
6. 'Thooma' is the key ingredient of most Sindhi dishes. What is it in the English lingo?

Lots of garlic is used in our Sindhi cuisine and it gives a BIG UMPH! to the dish as well as the stomach and mouth. But generally it has been proven that garlic is good for the health. I don't have the details though.
7. 'Dhabaroti' is a very common item in the international community. What is this in English?

If you got this one right then you have to be a Sindhi...just joking.
Chappati, was, is and will remain the staple diet in general for the Indian
community. But bread which is made from whole wheat is an okay subsitute because it is cold and chappatis are usually eaten hot.
8. What is the meaning of 'Vaangar'?

There is a very special Sindhi dish made from Eggplant called
'vaagar jo bharto'(mashed eggplant with onions and tomatoes).
9. 'Davaa' is the equivalent of what in the English Language?

Sindhis have a good choice of medications to choose from. Some of the types of medication used by Sindhis are..
a)The Western type of medication that one may find in clinics.
b)Homeopathy ..this medicine is made from plant extracts and it originated in Germany.
c)Ayurvedic..this is the ancient Indian naturopathy type of medication where herbal plants are used.
10. 'Maan Ghar Tho Vaanyaan' is a Sindhi statement meaning what in English?


Answer: I am going home

A majority of Sindhis prefer a stable home lifestyle and normally the married ones would prefer to return home from work. Yet there are many in India today that do not have proper shelters over their heads.
11. 'Palang' is the Sindhi word for?

The orginal beds were made from wooden frames and jute strings running in criss-cross across the frame of the bed.
This is called 'khate'. Even now these beds are found in yards rather then in the homes.
12. 'Kotmeer' is very extensively used in most Sindhi dishes. What is this called in the English language?

It's like what basil leaves, parsley and thyme are to the Italian cuisine.
13. 'Paapar' is THE most important snack item generally among the Sindhis. What is it?


Answer: Papadams made from lentil flour and black pepper

No Sindhi meal is complete without 'Paapar'(savoury snack). It is either eaten on its own or with yogurt or it is served with a drink or plain water.
Sindhis call it Paapar and South Indians call it Papadam (It is also spelt as Papadum) but they make it quite different from the way Sindhis would make them.
The South Indian version can only be eaten fried while the Sindhi version can be eaten baked over the fire or fried.
14. What is the meaning of 'Dhal'?

There are roughly 10 types of lentils that I know of that we Sindhis eat....there could be more.
15. What is the meaning of 'Tun Sindhi Sikhandein'?


Answer: Do you want to learn how to speak Sindhi?

Sindhi is written quite closely resembling the Urdu language of Pakistan with
a slight variation in some characters.
Source: Author haresh 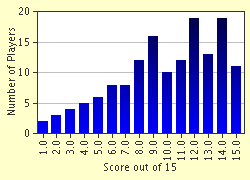 
Other Destinations
Explore Other Quizzes by haresh