This is a miscellany of language questions - some quite demanding. In each case choose the most idomatic version. Have fun!

Quiz Answer Key and Fun Facts
1. You find a 'Pension' which looks as if the outside hasn't been altered since the 1960s. You are struck by the fact that it proudly claims to offer 'solide Preise'. What does this mean?

There's often a reluctance in German to use the word 'billig' - 'cheap', probably because it can have connotations of shoddiness, as in 'schlecht und billig' - 'cheap and nasty'. However, the use of 'solide' in the sense of 'cheap' is unusual. A much more commonly used word is 'preiswert', which means 'good value'.

However, '*preiswerte Preise' is unacceptable in German. (German is *much* less tolerant than English of avoidable rhymes and repetitions in linguistic usage).
2. How does one normally say in German 'a house with a blue roof'?

The *indefinite* article is generally omitted in phrases consisting of a preposition + adjective + noun: in the case of 'mit' and 'von', in particular, omission is standard. As for 'blaudðchig', it's creative but unless your German is very advanced, it's best to treat linguistic creavity with caution, as it may be seen as an indication that you're having difficulty expressing yourself. That said, German is (probably) more tolerant of linguistic creativity than many other languages, but one needs experience in using the language to acquire an intuitive sense for which kinds of neologisms are accepted and which are not. 'Blaudðchig' isn't a good candidate - it sounds about as strange as 'blue-roofed' in English.
3. Which of these is the correct translation of 'He is sitting in the armchair, the dog at his feet'?

This construction is traditionally called the 'accusative absolute'. It is used instead of 'mit' + dat., which is the common way of handling this. Many speakers of other languages are tempted to start the phrase with 'der Hund ...' However, the nominative isn't a 'neutral' case that can simply be used when no other case is obvious.
4. How does one say 'It's about to start'?

When Queen Elizabeth II visited Germany in 1965 the then President of the Federal Republic, Heinrich L■bke, allegedly said to her, just as a firework display was about to start, 'Equals goes it loose'. However, it is more likely that this was invented by journalists.

'Demnðchst' is generally used of books, films, etc. as, for example, 'Erscheint demnðchst' followed by a list of titles. The nearest English equivalent is 'forthcoming'.
5. How does one say in German 'He boggled open mouthed'?

'Mund und Nase aufsperren' - 'to boggle open mouthed, to be all a-goggle and a- boggle'. There is no such verb as '*bogglen' in German ... 'Mit groÔen Augen' means 'wide-eyed', and 'entsetzt' means 'horrified'.
6. How does one say in German 'She got the shock of her life'?

'Sein (ihr) blaues Wunder erleben' - 'to get the shock of one's life, to get a rude awakening'.
7. Someone exclaims 'Pfui!' Which of these is the closest English counter-part?

Alternatively, depending on age-group and formality, 'yuck'. 'Pfui' and 'fie' are etymologically related. Note also: 'der Pfuiruf' (pl. -e) - 'boo' (noun). However, it has been largely superseded by 'der Buhruf' (pl. -e), and the use of '(jemanden) ausbuhen' - 'to boo (someone)' is quite common.
8. What is the correct way of saying 'They've walked past the house'?

For 'to go, walk, drive past something' use 'an + dat. vorbeigehen (vorbeifarhen)'. There is also a transitive verb 'passieren' (reg.) which means 'to cross', as for example in 'Wir haben die Grenze passiert'. This should not be confused with passieren (intrans., reg. with 'sein') - 'to happen'.
9. 'Es rumort im Garten'. What does this mean in English?


Answer: There's a noise in the garden

This is an example of an impersonal verb. Compare with 'es regnet' -'it's raining', 'es klingelt' - 'the bell is ringing, someone is ringing the bell, there's someone at the door'. 'Rumoren' is rather unsual it can *only* be used as an impersonal verb. Note also: 'es rumort im Volk' - 'there's unrest among the people'.
10. A restaurant proudly advertises 'Gutb■rgerliche K■che'. What on earth does this really mean?

The expression has nothing to do with the middle classes (though such restaurants tend to be in the middle price range). German cuisine varies considerably from region to region. Prominent traditional features in many parts of the country include game and venison.
Source: Author bloomsby 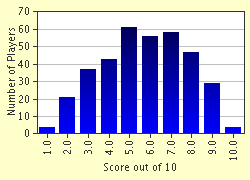