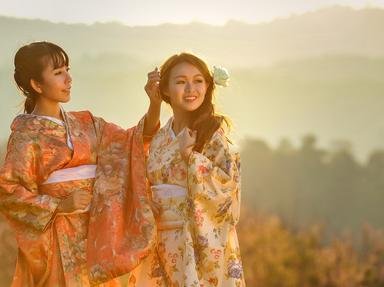 Japan has a global reputation for manufacturing high-quality products. Find out the meaning of the names of the manufacturers of ten well-known Japanese companies.

Share on Facebook
Share on Twitter
Share by E-Mail
Author
sw11
Time
4 mins
Type
Match Quiz
Quiz #
401,680
Updated
Dec 03 21
# Qns
10
Difficulty
Average
Avg Score
6 / 10
Plays
123
Mobile instructions: Press on an answer on the right. Then, press on the gray box it matches on the left.
(a) Drag-and-drop from the right to the left, or (b) click on a right side answer box and then on a left side box to move it.

Soichiro Honda founded the company in 1948. For a long time in history, Japan was an isolated nation. The name Honda is related to "rice paddy field".

The translation to Chinese is "ben tian", "ben" is original and "tian" is rice field.
2. Abundant rice field

Kiichiro Toyoda was the original founder of Toyota in 1937. The name was changed to Toyota which was easier for people outside Japan to pronounce and relate to. "Toyoda" means "abundant rice field" in Japanese.

Translated to Chinese, "Toyoda" is "feng tian", "feng" is abundant and "tian" is rice field.
3. Under the pine tree

Konosuke Matsushita started Matsushita Electric in 1917, later known as Panasonic, to become the largest consumer electronics manufacturer in Japan. "Matsushita" can be broken into two Japanese words, "matsu" meaning pine or fir tree and "shita" meaning under or below.
4. Unite, six stars

Subaru was founded in 1953 by Kenji Kita and Chikuhei Nakajima. In Japanese, "subaru" means unite. It is the name for Pleaidas star cluster M45 or "Seven Sisters". Subaru's logo is known as "mutsuraboshi" meaning "six stars". The seventh star is invisible.
5. Bell tree

In Japanese, "suzuki" means "bell tree" or "bud tree". Michiro Suzuki founded the company in 1909 in a sea-coast village in Hamamatsu. The company started to manufacture weaving looms for the booming silk industry.

The three rhombus logo of Mitsubishi is related to the three diamonds. "Mitsu" is three and "bishi" is a water caltrop or water chestnut. The company was founded by Yataro Iwashi in 1870.
7. Made in Japan

"Nissan" simply means made in Japan. Masujiro Hashimoto founded the Kaishinsha Motor Car Works in 1914 and became the first car maker in Japan in 1916. In the 1930s, it started to manufacture cars under the brand name of Dastun. In 1933, Nissan Group took control of the company.
8. Fifty bells

The name "Isuzu" means fifty bells pealing in harmony and celebrations. In 1916, Isuzu was created when Tokyo Ishikawajima Shipbuilding and Engineering started its expansion to manufacture automobiles.

Translated to Chinese, it is "wushi ling", "wushi" is fifty and "ling" is bell.
9. Mountain leaf

Yamaha is a manufacturer of motorcycles and musical instrument, was founded by Torakusu Yamaha in 1955. In Japanese, "yama" is mountain and "ha" is blade of leaf or grass. To the samurai, it is a symbol which is related to swords, blades and natural features such as mountains, rivers and forests.
10. River cape

"Kawasaki" in Japanese means river cape, "kawa" is river and "saki" is cape. The company was founded by Shozo Kawasaki in 1896. Besides manufacturing motorcycles, Kawasaki Heavy Industries is a manufacturer of heavy equipment, aerospace equipment, and defence equipment.
Source: Author sw11