What is Easter About? Trivia Quiz

The chocolate eggs will be in the shops before we know it, but is that really all Easter is about?

Quiz Answer Key and Fun Facts
1. On which day is it traditional to make pancakes?

Pancakes were made to use up the last of the eggs and butter before the Lenten fast. People would feast on meat and other rich foods, hence the name Mardi Gras - or Fat Tuesday - in French. The absence of eggs from the fasting diet could also have some part in the association of eggs with Easter.
2. What are the 40 days before Easter known as?

Lent lasts for forty days before Easter, excluding Sundays, as they are considered to be 'festival' days. It begins on Ash Wednesday, the day after Shrove Tuesday. In the Catholic Church it ends on Maundy Thursday, whereas in the Anglican Church it ends on Easter Eve. Lent is a season of restricting the diet, as opposed to strict fasting. Nowadays people give up certain foods that they enjoy; in the past they would have given up meat, eggs, butter, fish and oil, amongst other things. Jesus went into the wilderness for forty days to fast and pray before beginning his ministry.
3. What does Palm Sunday celebrate?


Answer: Jesus riding into Jerusalem on a colt or donkey

Palm Sunday (also known as Passion Sunday) is the Sunday before Easter and is the starting-point of the passion story. In the Revised English Bible, Mark 11 v7, it says that Jesus rode into Jerusalem on a colt: 'So they brought the colt to Jesus, and when they had spread their cloaks on it he mounted it.'
4. Jesus was crucified on Easter Sunday.

Jesus' crucifixion is remembered on Good Friday; Easter Sunday celebrates his resurrection. In England it is traditional to eat hot cross buns on Good Friday.
5. Easter is celebrated on the same date each year.

The date of Easter Sunday is on the Sunday following the first full moon after the spring equinox on the 21st March. (This is calculated by the Church, and does not always correspond with the astronomical equinox.) In the Eastern tradition Easter is celebrated on a different day from the Western Christian Church, as the Eastern Church still uses the Julian calendar.
6. For how many pieces of silver did Judas Iscariot betray Jesus?

In the Gospel of Matthew, Chapter 26 verse 15 it describes how Judas went to the Chief Priests and they weighed out thirty pieces of silver for him. Judas later realized what he had done and no longer wanted the money, so it was used to buy the Potter's Field (also known as the Blood Acre) where foreigners were buried.

The thirty pieces of silver as the price on Jesus' head had been prophesied by Jeremiah.
7. What does Gethsemane mean?

The Garden of Gethsemane is on the lower slopes of the Mount of Olives, and so was planted with many olive trees (It is believed that some of those trees still produce olives today.) and had lots of olive presses as well. Jesus went to the Garden of Gethsemane after singing the Passover hymns, to pray. It was in this garden that they came to arrest him, following Judas' betrayal.
8. According to St John's Gospel, what colour was the cloak that Jesus wore when he went to the cross?

In John 19 v2 and v5 it describes the cloak as purple; John says that the soldiers put the cloak on Jesus after he had been flogged, along with a crown of thorns. Purple was an expensive colour dye to produce, and so was only worn by those rich enough to afford it. It is significant that Jesus was dressed in this royal colour at this time. The Romans chose this colour robe because they said he claimed to be king. This could also be a reason for the soldiers drawing lots for Jesus' clothes after his death. In church now, purple is the colour of Advent and Lent, as Christians prepare for their King.

It should be noted that Matthew's Gospel (Matthew 27:28) states that the robe was red or scarlet.
9. Who helped Jesus carry his cross?

Simon of Cyrene is named as the father of Alexander and Rufus (Mark 15 v21), although it is not known who Alexander and Rufus were. As Jesus had undergone so much suffering, he was in no fit state to carry his own cross, so the soldiers pressed Simon of Cyrene into service. This may have been common practice, as a huge cross would have been very weighty for even the strongest man.
10. Who rolled away the stone from the mouth of the grave in which Jesus had been placed?

Matthew 28 v2 says, "Suddenly there was a violent earthquake; an angel of the Lord descended from heaven and came and rolled away the stone, and sat down on it." The importance of Easter exceeds that of Christmas in the minds of Christians, because of the significance of the resurrection.
Source: Author beckyel 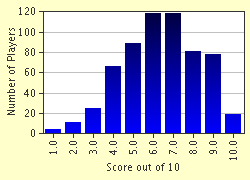 
Other Destinations
Explore Other Quizzes by beckyel