Who's Who in Arlington National Cemetery Quiz

I recently took a tour of Arlington National Cemetery, which inspired me to create a quiz regarding those who are interred there. They are a diverse and interesting group.

Share on Facebook
Share on Twitter
Share by E-Mail
Author
keithkomodo
Time
5 mins
Type
Multiple Choice
Quiz #
322,463
Updated
Dec 03 21
# Qns
10
Difficulty
Tough
Avg Score
6 / 10
Plays
475
This quiz has 2 formats: you can play it as a or as shown below.
Scroll down to the bottom for the answer key.

Quiz Answer Key and Fun Facts
1. William Howard Taft is the first United States President to be laid to rest at Arlington. During his life time, he also held all of these offices except which one of the following?

Prior to being elected President in 1908, Taft was selected by President McKinley to be the Governor-General of the Phillipines after the Spanish-American War. In 1904, Teddy Roosevelt appointed him as Secretary of War. His post presidential career included serving as the Chief Justice of the Supreme Court.

He never was the Attorney General of the United States, but he did serve as Solicitor General, the position responsible for arguing the Government's side before the Supreme Court. Unfortunately, most Americans, if they know of Taft at all, it is because he was the heaviest President to hold office through the twentieth century. Taft is in Section 30, Grave S-14.
2. Which of these former Heavyweight Boxing Champions was laid to rest at Arlington?

Louis was buried at Arlington in 1981. Then President Reagan granted Louis a waver allowing him to be buried there, as his military service did not meet the required criteria for internment. Louis did serve in non-combative positions during World War Two, primarily providing morale boosting exhibitions.

His refusal to accept second class treatment helped pave the way for the desegregation of the armed forces under President Truman. Schmeling, the first man to defeat Louis in the ring, served in the German Air Force in World War Two, and he is buried in Germany. Louis is in Section 7A, Grave 177. Marciano rests in Florida, Tunney in Connecticut.
3. Which of these Five Star generals from World War Two is interred at Arlington?

Bradley, who commanded the the one million strong 12th Army, is buried in Section 30, Lot 428-1. He was the last person awarded a fifth star in the twentieth century. Eisenhower, the Commander of all Allied forces in Europe was laid to rest in his home town of Abilene, Kansas. Patton, leader of the Third Army, died in a motor accident in 1945, and is buried at the American Cemetery in Luxembourg. MacArthur, who commanded the War in the Pacific, is interred at his memorial in Norfolk, Virginia.
4. Who was the first person to have a night time burial service at Arlington National Cemetery?

Robert Kennedy was the first, and through the year 2009, only person to have a night time service at Arlington. His funeral mass was held in New York City, and the train bearing his remains did not arrive in Washington D.C until after 9pm, so officials elected to conduct the service that night. Joseph Kennedy Jr was killed in Cambridge, England when an experimental airplane he was piloting exploded in 1944.

His remains were never recovered. John and Edward Kennedy are buried in Section 45 of Arlington, as is Robert.
5. General Daniel James, Jr. was laid to rest at Arlington. What is his claim to fame?

Daniel James, Jr. obtained his fourth star in 1975. A member of the Air Force, he flew 101 combat missions in Korea, and 78 in Vietnam. His grave site is located in Section 2, Grave 4968B LH. The first African-American General was Benjamin Davis of the Army.
6. According to the National Park Service, the grave of which former war hero is the second most visited, behind only that of John F. Kennedy?

Audie Murphy was the most decorated soldier of World War Two. In one incident, he single handedly held off an attack by over two hundred German opponents, killing around fifty of them. After the war, he became an actor and appeared in over forty films.

He lies in Section 46, Lot 366-11, near the Tomb of the Unknown Soldiers. During World War One, Alvin York, acting alone, captured one hundred thirty-two enemy soldiers. General John 'Black Jack' Pershing is the only General besides George Washington to be ranked higher than Five Stars.

He lies at Arlington, Section 34, Lot S-19. Milton Olive, an eighteen year old soldier in Vietnam, jumped on a grenade, sacrificing his life to save four fellow soldiers. He is buried in Mississippi.
7. On May 12, 1892, Caleb Swan, William Burrows, and James House became the first veterans from which conflict to be re-interred at Arlington?

Those three were veterans of the American Revolutionary War, and can be found in Sections 1-301-B, 1-301-C and 1-297-A, near the Arlington Mansion. America was not a nation during the French and Indian War, and Texas was not part of the country during the battle of The Alamo. The Battle of San Juan Hill did not occur until 1898.
8. What is unique about James Parks?


Answer: He was the first person to be both born and buried at Arlington

James Parks was a slave born on the grounds of the Arlington Estate, prior to it becoming a National Cemetery. He lived at Arlington for ninety years, and dug many of the early graves there. A father of twenty-two children, he was granted an exemption, and today lies in Section 15, Grave 2.

There are at least 62 foreign nationals buried at Arlington from 12 nations. There are a number of non-veterans buried also, including Supreme Court Justices.
9. On May 13, 1864, Private William Christman of the 67th Pennsylvania Infantry became the first to be what at Arlington National Cemetery?

On that same day, Private William McKinney of the 17th Pennsylvania Cavalry was the first to have family present at his burial, and Private William Reeves of the 76th New York Infantry became the first draftee (as opposed to volunteer) soldier laid to rest.

A day later, Private William Blatt of the 49th Pennsylvania Infantry became the first battle casualty buried at Arlington. All of them are in Section 27.
10. Which of the following is not an astronaut from the Space Shuttle Columbia to have their remains interred at Arlington?

Chaffee was one of two Apollo I astronauts buried at Arlington, Virgil Grissom being the other. The third member of that crew, who were all killed when a fire broke out during a launch test, Ed White, is buried at West Point. Anderson, Brown, and Clark all died, along with four others, during the Columbia's re-entry from space in 2003.

In addition, the Space Shuttle Challenger Memorial has partial remains from the seven astronauts lost during its explosion just after take-off in 1986.
Source: Author keithkomodo

This quiz was reviewed by FunTrivia editor Snowman before going online.
Any errors found in FunTrivia content are routinely corrected through our feedback system.
Most Recent Scores
Jan 14 2023 : Guest 77: 9/10
Dec 18 2022 : Guest 73: 10/10 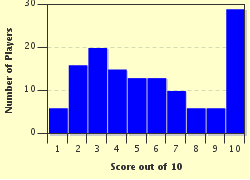 
Other Destinations
Explore Other Quizzes by keithkomodo