If you are like me and never go out on a certain Saturday each year, then this quiz is for you. From the very beginning onwards. Enjoy.

Quiz Answer Key and Fun Facts
1. In 1979, Israel came first with the song "Hallelujah" - who sang this winning song?

Gali Atari was a female solo artist who was asked to join Milk & Honey for this song. She took to the stage in a gorgeous pink dress and sang the first verse on her own. The song was so popular on the night, the crowd were on their feet cheering before it had finished.
2. Although it had a convincing win, the 2002 winner of the Eurovision Song Contest was the first winning song ever not to be released anywhere outside its own territory. What country and song was it?

In fact, the song failed to excite even in Latvia - it sold in such small quantities it failed to break the Latvian Top 30. I admit, I love it.
3. Celine Dion won the contest in 1988 before she hit super stardom. But what country did she represent?

Celine had just been signed to Sony/CBS plus she became romantically involved with her then to be husband, Rene Angelil, during that week in Dublin. Lots to celebrate then.
4. Ruslana took to the stage representing Ukraine in 2004. What word is missing from the anthemic cry of the song "Go, go, go Wild ..."

This was only the second time Ukraine had entered and they walked off with that coveted trophy. Mind you, it was exciting!
5. Sandra Kim took the title for Belgium in 1986 with "J'Aime La Vie". What was so different about her at the time?


Answer: She lied about her age

Sandra claimed to be 15 at the time but it emerged later that she was only 13. Nobody has ever worked out why her management decided to do this!
6. The very first Eurovision Song Contest took place in 1956; where was it held?

The very first song ever performed in the contest was the first Dutch entry performed by Jetty Paerl and entitled "De Vogels Van Holland", (the Birds of Holland). It is not known where the song placed as only the winning entrant - Switzerland - was recorded.
7. The Executive Supervisor of ESC (the Big Cheese) seems to have held this position forever! He's well known throughout the ESC world - what is his name?

Having celebrated 50 plus years of Eurovision so far, Stockselius is convinced there is no reason why it shouldn't celebrate its 100th. Will he still be Executive Supervisor?
8. Urban Trad nearly took the title again for Belgium in 2003 with the song "Sanomi", but what was so unusual about this particular song?


Answer: It was sung in a made up language

Belgium has spent each alternate year singing in an alternate language - one year, French, the next Flemish. Urban Trad threw this completely out of the window when they sang in this made up fantasy language. I have yet to find out what the song is actually about!
9. Before the change to the voting regulations took place to ensure there could be only one winner, in 1969 first place was shared by four different countries. Which four had the dubious honour of "winning" in that year?

This four way tie was met with disbelief by all involved as no-one actually thought it could happen. The mistress of ceremonies had to ask again and again for a confirmation of the outcome, and even when Clifford Brown, the official scrutineer, confirmed the verdict, she still wouldn't believe it. Eventually, as she announced each "winner" in turn, she was still incredulous that this could have happened - and the audience were equally stunned.

The following year, a mechanism was put in place to break a tie if it happened again.
10. Eurovision traditionalists were furious when a rule change meant it was no longer necessary to use live music which resulted in the discontinuation of the orchestra, with some describing the competition as "karaoke". What year did this rule change take place?

The debate still rages whether this was the right decision to make. This was also the year when the rules were relaxed regarding the language each country could sing in and all countries were free to sing in any language they chose - which usually meant English, with hilarious translations and pronunciations! Too many changes in one go?
Source: Author Minxie2 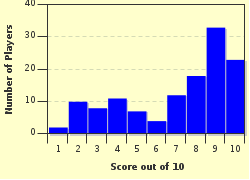 
Other Destinations
Explore Other Quizzes by Minxie2