This 'music' competition takes place every year in May between competing European nations. It's famous for its bad songs, bad costumes and banal witless lyrics. But how much do you know about this European 'Cheesefest' (or care to admit to)?

The song was called 'I love the little things' and failed to win. It also wasn't released as a single.
3. The United Kingdom first won the competition in 1967 with 'Puppet on a string'. Who sung the song?

Sandie Shaw was already famous by this time and had scored two number ones in the U.K chart before 1967. 'Puppet on a string' was released as a single which became her third and last number one.
4. Cliff Richard won the Eurovision Song Contest with 'Congratulations' in 1968.

Cliff finished second to Spain at the Royal Albert Hall, London. There was some consolation, however, as 'Congratulations' reached number one in the U.K chart.
5. Dana won Ireland's first Eurovision Song Contest in 1970. What was the name of the song?


Answer: All kinds of everything

Dana went on to have her own show for the B.B.C in the 1970's. Later she became involved in politics and now represents Ireland as a Euro M.P.'All kinds of everything' hit number one in the U.K chart.
6. Cliff Richard returned in 1973 and won the competition with 'Power to all our friends'.

Cliff never had much luck with this competition and finished third this time ( Luxembourg won ). Released as a single and reached number four in the U.K chart.
7. In which year did ABBA win the Eurovision Song Contest?

With 'Waterloo'. The Swedes went on to have nine number one hits in the U.K chart and huge international fame.
8. Which two countries are famous for always awarding each other maximum points?

Every year without fail, they vote each other for top marks. Obviously some favouritism is shown here and interestingly both countries rarely win the competition.
9. Celine Dion won the competition in 1988 with 'Ne partez pas sans moi'. Which country did she represent?

Celine Dion is not Swiss but French Canadian. The competition rules stipulates that the song has to be written by native countrymen/women but the actual singer can be any nationality.
10. Which country has won the competition the most times?

Ireland have won it seven times and the United Kingdom come second with five wins along with France and Luxembourg.
Source: Author chris42 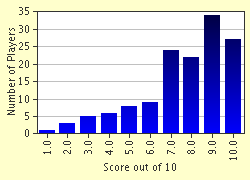 
Other Destinations
Explore Other Quizzes by chris42