Let's see what do you know about this great musical event. Enjoy yourself and GOOD LUCK!

The UK missed the contest because the BBC was too late with the national selection.
2. In what year did the ESC start?

Jury chairman only mentioned the winner, Lys Assis for Switzerland, and until today, the final ranking has not became public.
3. The Israeli singer Dana International, who won the 1998 ESC with the song "Diva", created a lot of controversy around her. Why did that happen?


Answer: Because she was transgender

Dana Internationalīs sexuality even led the Israel's head of state to announce that if she would represent Israel in the ESC, he would dissolve the parliament.
4. Which of the following countries made its debut participation in the 1974 ESC?

Greece was represented by a singer called Marinella and the winning song "Waterloo" was performed by the group Abba.
5. Greece had never won the ESC until 2005. What was the name of the group that helped this country to get the 3rd place in 2001?

Though the elements of this group are descendants of Greeks, their music is mainly played in Scandinavian countries, where they have huge success.
S.A.G.A.P.O. represented Greece in 2002 and Mando in 2003. FLY was the group that sung the Latvian entry in 2003.
6. Who has been, for the last 20 years, the commentator of the ESC for Spain?

Jose Luis Uribarri is the most wellknown comentator in Spain when it comes to ESC issues. The other three are also related to the ESC: Sergio Dalma represented Spain in 1991, Pilar Tabares was the responsible for the introduction of Operacion Triunfo (OT) in Spain and Carlos Lozano is OT's Monday shows host.
7. What does EBU stand for?

EBU is composed of the public television networks of almost every European country.
8. Besides United Kingdom, Germany and France what other country belongs to the so called "Big 4"?

No matter the score they achieve, these four countries have a guaranteed place in the final of the following year.
9. What country were Abba representing when they won the ESC in 1974?

The winning song was called "Waterloo" and got only 24 points.
10. Has the UK ever scored last with "nul points" in the ESC?

It happened in 2003 in Latvia with the song "Cry baby" sung by the group Jemini.
Source: Author elomaisforte 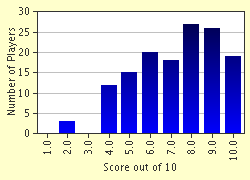 
Other Destinations
Explore Other Quizzes by elomaisforte