Forget Pop Idol! The Eurovision Song Contest has been testing performers since 1956. But how much do you know about it? Take this quiz and find out!

Quiz Answer Key and Fun Facts
1. Who is the only person to have won the competition twice?

In 1974 the contest was held in Brighton, England, and the United Kingdon jury, presumably transfixed by the outlandish clothes worn by the Swedish entry, gave them no points. The group was ABBA with the memorable song "Waterloo", and the rest, as they say, is history. One of the UK jury members is quoted as saying that they formed a support group to live with what they had done.
3. Norway's entry for the competition in 1980 concerned what?


Answer: The construction of a hydro-electric dam.

Needless to say it didn't do very well! Surprisingly enough, a nuclear protest was the basis for the Finnish entry two years later. But, sadly, "My Lovely Horse" never made it into the competition. It was an idea dreamed up by two priests in the comedy programme "Father Ted".
4. Which of these is NOT a winning Eurovision song?

While "Dick-A-Dum-Dum" was a hit, reaching number 14 in the UK popcharts in May 1969, it was not a Eurovision song. The singer was the incomparable Des O'Connor, who has, sadly, never graced the Eurovision stage. "A-Ba-Ni-Bi" won in 1978 for Israel, while "La La La" came first in 1968. "Diggi-Loo Diggi-Ley" gave Herrey's of Sweden victory in 1984. Still, the British can hardly complain about the quality of song titles. "Boom-Bang-a-Bang" was joint first for Lulu in 1969.
5. Which subsequently famous song writing team had their effort rejected as an entry by the UK in 1969?

The song from the then unknown Elton John was entitled "Can't Go On Living Without You" and was rejected in favour of Lulu's entry "Boom-Bang-a-Bang".
6. Which international superstar made an appearance in the contest in 1970?

Julio represented Spain in 1970 with his song "Gwendolyn" but lost out to Dana with "All Kinds of Everything".
7. There was no UK entry in the first contest in 1956. Why?

The first contest was won by Switzerland. The selection process for the UK entry took so long that they missed the deadline.
8. When the United Kingdom scored a humiliating "nul points" in the contest in 2003, who were the performers?

The stage monitors relaying the sound to the performers were too quiet which led to the entire first verse being sung completely out of tune. It was the first time that the UK has scored nothing at all -unlike Norway who have had that experience on several occasions.
9. When Cyprus participated for the first time, what action was taken by Turkish television?


Answer: Cut to the adverts during the Cypriot song.

Their action infuriated the Eurovision organisers who believe that the contest should promote harmony among the participating nations, and that any political differences should be laid aside for the competition. The UK commentary by Terry Wogan gave the true picture of how the competition works.
10. Terry Wogan, that well known Irishman, provided the commentary on the song contest for British television viewers until 2008. His irreverent and laconic remarks were fuelled by what beverage during the event?

Terry Wogan says, "I don't touch the stuff except during Eurovision. We can judge the quality of the contest by how late we start drinking Bailey's. If the songs are good we hold off till about halfway through. If they're bad, we start earlier." 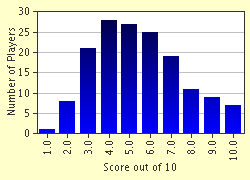 
Other Destinations
Explore Other Quizzes by MaggieG