The Eurovision Song Contest is a yearly live broadcast of a song contest. Participants from various European countries perform one song, and the jury and/or the audience then votes. And twelve points go to... the European Players, for crafting this quiz.

Share on Facebook
Share on Twitter
Share by E-Mail
Author
JanIQ
Time
4 mins
Type
Multiple Choice
Quiz #
326,774
Updated
Dec 03 21
# Qns
10
Difficulty
Average
Avg Score
7 / 10
Plays
416
Awards
Top 35% Quiz
This quiz has 2 formats: you can play it as a or as shown below.
Scroll down to the bottom for the answer key.

Quiz Answer Key and Fun Facts
1. The 31st edition of the Eurovision Song Contest, held in 1986, had a Belgian winner - the first time ever. Sandra Kim, aged 13, won. What was the title of her song?

All these song titles were performed in 1986 at the ESC.
Sandra Kim, born Sandra Caldarone, won with an enthusiastic performance of "J'aime la Vie" ("I Love Life"). The Swiss delegation moved for a disqualification as the lyrics of this song state "J'ai quinze ans" ("I'm fifteen years old"), which was not true at that time. However, in 1986 there was no alternative version for young participants, so Sandra Kim could keep the title.

As for the other songs: Timna Brauer sang "Die Zeit ist Einsam" ("The Time Is Lonely") for Austria and finished 18th. Ketil Stokkan competed for Norway and sang "Romeo". He became 12th. And the Swiss Daniela Simons claimed the second place with her song "Pas pour Moi" ("Not for Me").

This question was brought to you by player JanIQ from Belgium.
2. After her victory in 1957, Dutch singer Corry Brokken set out to defend her title in 1958. What place did she end up in, before a home audience?

After winning in 1957 with her song "Net als toen", Corry Brokken wanted to defend her title in Hilversum. Receiving only a single point, she finished on a disappointing shared last place with her title "Heel de Wereld".

She also performed in the first Eurovision contest ever held, in 1956. Although her final position is unknown, she is said to have done well with her song "Voorgoed voorbij".

In 2010, she still holds the record for being the only competitor to finish both first and last at the Eurovision Song Contest.

GraceGreer from the Netherlands crafted this question.
3. Poland debuted in the Eurovision Song Contest only in 1994, with the song "To nie ja!" ("That's not me!") performed by Edyta Górniak. Despite a minor scandal during the rehearsal, the singer avoided disqualification and finished at what rank?

This second place is by far the best ranking of any Polish performer at the Eurovision Song Contest (as of 2010). In 2003, Poland managed another top ten finish (Ich Troje at seventh place).

Question by player Krzysztof.
4. The Eurovision Song Contest of 1974 was one of the first in which participants could choose the language they would sing in. Who won with the song "Waterloo" (sung in English)?

The song "Waterloo" was performed by the group ABBA, competing for Sweden. The band was named after the first names of their members: the Norwegian singer Anni-Frid Lyngstad and her Swedish husband Benny Andersson, and the Swedish couple Björn Ulvaeus - Agnetha Faltskög. The two marriages broke up later on.

The other names were of other 1974 contestants. The Italian singer Gigliola Cinquetti finished second with her song "Si". She's better known for her 1964 song "Non ho l'eta". Mouth and Macneal, the Dutch duo, ended third with "I See a Star". Olivia Newton-John sang "Long Live Love" for the UK and came in fourth. She's better known for the duet "You're The One That I Want" out of the movie "Grease" (1978).

This question was brought to you by player JanIQ.
5. The United Kingdom has a rich heritage in the Eurovision Song Contest, with Cliff Richard and Buck's Fizz among our performers. However in recent years, our fortunes have taken a nose-dive. What was the name of the first British group to come home with "null points, zero points", in Latvia in 2003?

Jemini were formed in 1995 by Chris Cromby and Gemma Abbey, under the name Tricity. They later changed it to Jemini (Gem-and-I) at the age of 19. Hailing from Liverpool, their song "Cry Baby" was widely criticised for being off-key, and is widely regarded as the most unsuccessful UK Eurovision song of all time, due to the record 26 countries taking part in the contest. Despite this, the song achieved some success in Colombia, where it reached number 19 in the Hot 100 chart.

This question was brought to you by MusicalMan90, who suffers Britain's entries every year!
6. Ireland won the Eurovison Song Contest multiple times. Johnny Logan was a large part of that success winning for the Emerald Isle in both 1980 and 1987. He is also responsible for writing another winning song for Ireland. Which song, that was not sung by him, is he the author of?

Johnny Logan wrote the song "Why Me" in 1992. It was performed by Linda Martin. It is quite a romantic song which has the singer wondering why, out all of the people he could have chosen, her lover has fallen for her.

Niamh Kavanagh won the contest in 1993, a year after Linda Martin's win. Ireland seem to win with love songs mostly, as this one is about finding love after having been lonely for so long.

Paul Harrington and Charlie McGettigan completed a famous hat trick for Ireland, winning the contest for a third year in a row in 1994. Rumour has it the Irish did not want to win this year and had sent in a song that they though was a bit different and would not do well. The song did not have a love theme, but was rather about lost youth.

Ireland did not win a fourth year in a row, but in 1996 Eimar Quinn won the contest for Ireland again. It is a nice folk song, focusing on "the Voice" controlling the forces of nature.

This question was written by James25.
7. Germany won the Eurovision Song Contest 2010 in Oslo with "Satellite". What was the name of the performer?

19 year old Lena Meyer-Landrut performed the winning title. The German entry won the ESC final in Oslo, gathering a total of 246 points. Turkey ("We Could Be the Same" by maNga) came in second with 170 points, Romania ("Playing with Fire" by Paula Seling and Ovi) gained 162 points and came in third.
It was Germany's second victory. In 1982 singer Nicole had won with "Ein bisschen Frieden".

Player rosaklebb crafted this question while humming "Satellite".
8. Italy came in third at the 1987 ESC final in Brussels with "Gente di mare", performed by Umberto Tozzi and Raf. What does the title mean in English?


Answer: People of the Sea

While not winning the contest, the blues-influenced ballad "Gente di mare" became a Top ten hit in many European countries in the summer of 1987.
Among Umberto Tozzi's most popular songs are "Ti amo" (1977) and "Gloria" (1979). Raf had an instant international hit with his first single "Self Control" in 1984.

This question was brought to you by player rosaklebb who considers "Gente di mare" her favorite Italian pop song.
9. In 1998, Dana International won the Eurovision Song Contest for Israel with the song "Diva". Why was this victory groundbreaking?


Answer: Dana International is a transsexual

Dana International is the stage name of Yaron Cohen (born as a boy) or Sharon Cohen (after a successful sex reassignment surgery). She is now physically and legally female.

The Eurovision Song Contest artists may not playback. There are specific rules and techniques to avoid this.

This quiz was reviewed by FunTrivia editor agony before going online.
Any errors found in FunTrivia content are routinely corrected through our feedback system.
Most Recent Scores
Nov 24 2022 : Guest 79: 5/10
Nov 02 2022 : Guest 66: 10/10 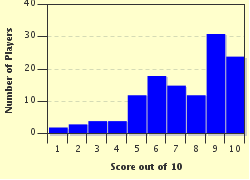