In 2006, the Eurovision Song Contest (ESC) had its 50th anniversary. In this quiz you are going to meet some of the most important and curious moments of ESC history. Let's find them out!

Quiz Answer Key and Fun Facts
1. In 1956, the first Eurovision Song Contest was held in Lugano. In which country can you find this city?

There were seven countries in the debut edition of the ESC: Belgium, Luxembourg, Italy, Germany, France, Netherlands and of course Switzerland. Each country presented 2 songs, which made 14 in total. The winning song was "Refrain" from Switzerland.
2. In 1958, Domenico Modugno (representing Italy), sang a song that became a huge success in the whole world. In this contest, he finished only 3rd. What is the name of this song?

"Volare" was covered more than 100 times in many languages. Probably the most famous cover was made by the Gipsy Kings in 1989. It was the first Italian song to reach #1 on the Billboard Hot 100.
3. In 1972, a Greek singer named Vicky Leandros, won the contest by singing "Aprčs toi" ("After You"). Which country did she represent?

It was the 3rd victory for Luxembourg in this competition (their first two wins were in 1961 and 1965). The song was covered in many languages, including Finnish.
4. In 1974, the famous Swedish band ABBA won the Eurovision Song Contest with the song "Waterloo". But one of the members of the band wasn't Swedish at birth. Which one?

Anni-Frid Lyngstad was born in Bjřrkĺsen, Norway in 1945. "Waterloo" was a huge worldwide success, becoming #1 in many charts and reached #6 in the Billboard Hot 100 in the U.S.
5. In 1979, the Eurovision Song Contest was held in Jerusalem, Israel. Germany was represented with a song that later made a huge success worldwide. What was its title?

"Dschinghis Khan" finished only 4th in that year's competition. But the worldwide success was unique. The song was covered in many languages including Greek, Korean and Japanese!
6. In 1988, a 20 year old Canadian singer named Céline Dion, represented a European country in the 33rd Eurovision Song Contest. The song's name was "Ne partez pas sans moi" ("Don't Go Without Me"). Which country did she represent?

The single of this song sold over 300,000 copies. Céline Dion wasn't yet as famous as we all know her today. But surely this victory helped her to become a superstar.
7. In the 1998 Eurovision Song Contest, Israel had won the competition with the song "Diva". The song was sung by a transsexual. What was her/his name?

Dana International was born in 1972 in Israel. Her/his real name is Sharon Cohen. The song was chosen in the 14 most popular songs in Eurovision's history.
8. During the first 50 years, only one country managed to win the Eurovision Song Contest three times in a row. Which country with important musical history was it?

Surprise, surprise! "Waterloo" (representing Sweden in 1974) was voted the best song of Eurovision's history. 2nd was "Nel blu dipinto di blu" (Italy, 1958), 3rd was "Hold Me Now" (Ireland, 1987), 4th was "My Number One" (Greece, 2005) and 5th was "Save Your Kisses for Me" (UK, 1976).
10. In 2006, the ESC was held in Athens, Greece. Finland won the competition for its first time in its history. The country was represented by a band named Lordi. What were the members of this band dressed as on stage during the presentation of their song?

Lordi won with a hard rock song named "Hard Rock Hallelujah" (first ever rock song to win the competition). The band stated that the costumes were inspired by the famous group "KISS" and horror genre.
Source: Author kthnos 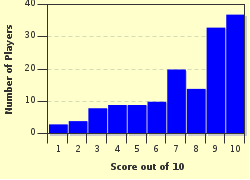 
Other Destinations
Explore Other Quizzes by kthnos