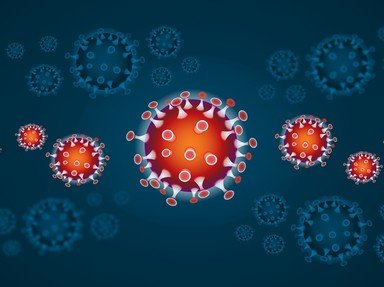 This quiz covers the various viruses which cause hepatitis and have been identified by the 2020s.
This is a renovated/adopted version of an old quiz by author Couchpotatoe

Quiz Answer Key and Fun Facts
1. As you'd expect from the name, the hepatitis viruses affect the liver. According to the name, how is the liver affected by the virus?

Any word ending in the suffix 'itis' refers to inflammation - examples are appendicitis, mastitis or tonsillitis. Inflammation of the liver can lead to permanent scarring, known as cirrhosis. Untreated hepatitis can also lead to liver cancer, and is one of the leading causes of this cancer, although by no means the only one.

Atrophy refers to shrinkage or wasting away while sclerosis is hardening. Porosis means becoming porous, as in osteoporosis where bone become riddled with larger than normal holes making them prone to breaking.
2. Although caused by different strains, the symptoms of all the hepatitis virus infections are broadly similar.

The acute stages of hepatitis viral infections are much the same, with tiredness, raised temperature, jaundice (yellowing of the skin) and nausea among them. Some people have no symptoms at all, though. The way in which the virus is transmitted, and the treatment needed, is what distinguishes the different strains of the hepatitis viruses.

Both hepatitis B and C can lead to chronic liver disease and have a major impact on the infected person's life.
3. When hepatitis A began to be identified as a specific disease, in which groups of people was it prevalent?

Hepatitis A was hardly a new disease, with descriptions of illnesses which sound very similar to it dating back 5,000 years in China, and the Greek Hippocrates also recording a disease he called 'benign epidemic jaundice'. It took until the seventeenth century for physicians to establish that outbreaks were often linked to military campaigns. Even as late as World War II, outbreaks were common among soldiers, in particular.

Since hepatitis A is spread by contaminated faecal material, it is easy to see how men living in close quarters in less than sanitary conditions could become infected.
4. Hepatitis A can be spread to humans by which animal?

Many experiments have been carried out in laboratories to see if hepatitis can be passed on to or from other animals, but only a limited number of infections have been found in non-humans, and these have been identified only in primates. Chimpanzees, who have similar DNA to humans, are the most likely animals to harbour hepatitis A with some species of monkey also naturally carrying the virus.

Infection of humans by apes or monkeys is rare.
5. Which of the hepatitis viruses carries the highest risk of being passed from mother to baby during childbirth?

The risk of passing hepatitis B to her child from a mother who has the virus can be as high as 90%. Anyone who is pregnant should be tested as a matter of routine to see if they are carriers. Higher than normal risks apply to health professionals, partners of people who are known to have hepatitis B and anyone from countries where the virus is common.

Preventative care can be given as soon as the baby is born by administering a vaccine against hepatitis B and some countries take other measures. The virus can be passed on via either a caesarean or vaginal delivery. Hepatitis C can also be transmitted to the baby, but the risks of this are much lower than for hepatitis B.
6. What is the only way in which hepatitis C has been proved to be passed between humans?

Hepatitis C is a relatively new illness, first discovered in the 1980s and positively identified by 1989. By 1991, a screening test for blood was able to identify the virus, although not before numerous people had been infected by blood transfusions which were contaminated with the virus. Blood is the only vector which has been identified for transmission, so sharing needles or failing to sterilise needles in, for example, tattoo parlours can also be risk factors.
7. By the end of the twentieth century vaccines had been developed for all three main hepatitis viruses (A, B, and C).

Effective vaccines for both hepatitis A and B were available from around 1990, but hepatitis C still does not have a vaccine available even during the first quarter of the twenty-first century. The development of the vaccines has drastically reduced the transmission of hepatitis, with vaccination against hepatitis B routinely given to children in many countries of the developed world.

The difficulty in producing an effective virus against hepatitis C is the high number of variations in its genotypes (at least seven have been identified in the first quarter of the twenty-first century) each of which has numerous subtypes.
8. Which type of hepatitis never exists in isolation, only in co-existence with another of the hepatitis viruses?

The hepatitis D virus cannot replicate itself in isolation and needs hepatitis B to enable it to multiply. Infection with both B and D is generally viewed as the most severe form of the disease and can progress more rapidly to liver cancer or other serious liver disease.

Immunisation against hepatitis B has reduced the incidence of hepatitis D as a side effect, but treatment of the infection has low levels of success once it has taken hold.
9. Hepatitis E can be passed to humans by eating raw or undercooked meat from which animals?

The illness can also be caused by what is known as 'zoonosis'. This means the virus can be found in animals such as pigs, wild boar, deer, rabbits and rats. It does not cause the animals any illness, but the virus can sometimes be passed from the animal to humans. One way this can happen is by eating raw or undercooked meat. In most cases the source and route of infection is unknown.

Baruch Blumberg was born in New York in 1925. His discovery of the hepatitis B virus came about accidentally while he was carrying out research into other blood diseases. The samples of blood he had collected from around the world enabled him, in the 1960s, to discover a previously unknown virus which was identified as the causal agent for hepatitis B. The discovery meant that blood could be screened for hepatitis B to remove the risk of it being passed in blood transfusions or similar medical treatments.

Blumberg turned his attention to developing a vaccination against the disease and his groundwork led to the effective vaccines available to prevent this infection. He was awarded the Nobel Prize for Physiology or Medicine in 1976 in recognition of his work.
Source: Author rossian


1. Hepatitis Viruses Average
2. Glaucoma, The Thief of Sight Average
3. A Guide to the Thyroid Average
4. Oesophageal Cancer Average
5. So You're a Hypochondriac! Average
6. On the Way Out Average
7. Down in the Bowels Average
8. Breathless Average
9. Match the Bone Average
10. I Got This Very Easy
11. How to Ruin Christmas Easier
12. Healing Hands Easier